Transport for Quality of Life 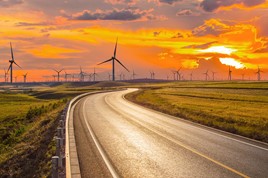 Despite plans to build a bridge between Scotland and Northern Ireland, connectivity between the UK member nations seems to be in short supply right now, particularly in terms of traffic reduction policies.

Scotland’s updated Climate Change Policy has set an ambitious and transformational target of 20% traffic reduction by 2030. The Scottish Government has promised to publish a route-map this year setting out its plan to meet the 20% reduction. This will complement other measures it is taking such as ‘20 minute neighbourhoods’ and a ‘Work Local’ programme.

The Wales Transport Strategy, ‘Llwybr Newydd’ (New Pathway) released in March, has also set some ambitious goals with a commitment that 45% of journeys are to be made by public transport, walking and cycling by 2040 (compared with the current share of 32%). As in Scotland, Wales is planning to reduce the need to travel by car, with a network of remote working hubs and enhanced broadband and is actively shifting away from the private car.

There is a welcome return of the Transport Hierarchy to guide decisions and the Welsh strategy has bravely committed to ‘develop a framework for fair and equitable road-user charging and explore other disincentives to car use’.

Meanwhile, back in Westminster, at the time of writing, we are still waiting for the Transport Decarbonisation Strategy, but the UK Government remains hellbent on increasing traffic levels with its £27 billion-plus road programme and 11 years of consecutive freezes to fuel duty.  Traffic levels on Britain’s roads have increased by more than 40% in the 30 years to 2019.

While the Government’s national bus strategy for England is welcome, and contains a lot of good proposals (see also page 10), the £3bn funding over five years promised barely makes a dent in the cuts over the preceding 10 years. According to the Department for Transport (DfT) figures public funding for buses in real terms was £890 million per year lower in 2019 than it was in 2009.

And Campaign for Better Transport estimates that more than half of local authorities have cut their financial support for buses by 50% in that period. At the same time, DfT has allocated a similar amount, £3bn, from the Housing Infrastructure Fund to relieve developers from having to pay for road infrastructure, while doing little to reduce or mitigate the impact of the traffic generated by new developments.

There is an increasing polarisation between DfT strategies for active travel, buses and carbon, and their actions to undermine this, wasting billions of pounds on road programmes that will only increase traffic and carbon.

However, much as you may want to have your cake and eat it, it is just not possible over the next 10 years (when the majority of traffic will be fossil-fuelled), to increase traffic levels and cut carbon at the same time. And it
is not desirable for a whole host of reasons.

Simply replacing petrol and diesel cars with electric ones may help cut carbon, but will not address all the other myriad impacts of traffic. It hardly needs to be said, though there are parts of DfT who don’t seem to be listening; that a smart transport strategy needs to cut unnecessary traffic as much as possible while providing convenient, affordable and reliable alternative ways to travel or avoid travel.

And these mixed messages trickle down to regional and local transport authorities who try to square the circle of funnelling billions into local road building programmes and car-dependent developments, while attempting to reduce carbon and promote alternative travel modes.

So how do we reverse the seemingly unstoppable trend of traffic growth and create a world where the car is no longer king?

We can look to Pontevedra in north-west Spain (population 84,000) which in the 1990s was blighted by high traffic volumes, noise and pollution and with struggling businesses, much like many UK towns and small cities today.

In 1999, a visionary and courageous politician Miguel Anxo Fernández Lores ran for mayor promising to make the city pedestrian-friendly and accessible to everyone, especially to the most vulnerable: disabled, the elderly and children.

The medieval centre was pedestrianised, car access was significantly reduced, parking limited and it was the first city to reduce speed limits to 30 km/h (20mph). This resulted in a 90% reduction in traffic with the number of cars entering the city going from 80,000 to 7,000 by 2019. Startlingly, there has not been a single person killed by a car since 2011. And bucking a national trend, families with children are flocking to Pontevedra, making it the fastest growing city in Galicia. And, 22 years later, Lores is still mayor, proving that car reduction can be a political vote-winner when people see the benefits.

We can also look to Barcelona, with its multi-hectare ‘superblocks’ which are low traffic neighbourhoods writ large. Implemented in 2016, the city plans to convert its entire centre into a pedestrian-friendly area over the next decade.

Little wonder that a study led by Christian Brand and published in Global Environmental Change showed that Barcelona had the lowest lifecycle carbon emissions associated with travel out of seven European cities. This low travel carbon footprint was attributed to its higher share of walking: nearly half of all trips in the city are walking trips and only 16% are motorised, half that of London.

What Pontevedra and Barcelona have done is perfectly possible in every UK town and city, to redesign our settlements to reduce or avoid the need to travel by car.

And car reduction is possible in rural areas too. A new report, Every Village, Every Hour, by my colleague Ian Taylor for the countryside charity CPRE, shows the Government could deliver a Swiss-style bus service to every village, every hour across England from 6am to midnight, seven days per week.

For an annual cost of £2.7bn this would transform rural areas from transport deserts to thriving communities and would have huge economic, social and environmental benefits.

CPRE points out that this expenditure could easily be covered by cancelling the Government’s climate-damaging road building programme.

Government needs to stop giving local authorities mixed messages and provide funding for a coherent and long-term strategy of reducing traffic and carbon and making the places we live more attractive and accessible.

So, all power to Scotland and Wales for leading the way, setting clear targets and showing that to reduce carbon we need to start by reducing cars.