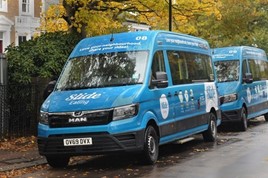 Slide, a new on-demand bus service, has started a 12 month trial in the west London borough of Ealing.

The new service has been put together through a collaboration between Transport for London, bus company RATP and Volkswagen-owned technology company MOIA.

The service will run using up to 10 new TGE MAN L4H3 Euro VI mini-buses. All the vehicles are Euro 6 and meet ULEZ standards

The trial was started following a public consultation earlier this year and it will operate seven days a week, 0600-0100, and cover an area from Southall in the west to the North Circular, and from the A40 down to Boston Manor in the south of Ealing. It follows on from a similar 12-month trial started in May this year with TfL, ViaVan (the Via and Mercedes-Benz joint-venture) and transport provider Go Ahead in Sutton, south London.

Passengers can book a ride using the app, or on the phone.

The service does not follow a fixed route, picking people up from flexible stops, creating a more personalised service. Once a ride has been secured, users will wait no longer than around 10 minutes for a bus.

Fares for the on-demand bus will start at a flat rate of £3.50, with passengers being able to benefit from weekly and monthly capping. Every tenth journey will be free.

The 12-month service will be socially inclusive, with Freedom Passes and the English National Concessionary pass accepted. The new buses can accommodate wheelchair users and are fully accessible.

Ealing was chosen as a research trial because there are relatively high numbers of private vehicles in the borough.

Figures show that 40% of people living in the area use cars – be they private or for hire – to get to work, and TfL believes an on-demand service could encourage people to switch to a more sustainable way of travelling.

The trial will also look to encourage Ealing residents to use public transport for the whole of their journey, linking locals with the proposed launch area’s 29 bus routes and 10 tube and rail stations.

Seat will expand its car sharing company Respiro to a second location just outside Barcelona at L’Hospitalet de Llobregat on November 14.