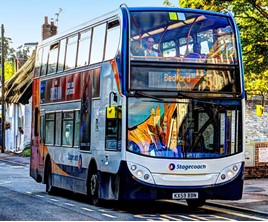 The next government will need to consider “radical changes” to arrest a long-term decline in bus use, according to a new report Driving change in the bus market: lessons from London.

Bus ridership per person has fallen by an average of more than 1% each year in the nine-year period since 2009/10 while fares have risen by an average of around 2% each year above the Consumer Price Index (CPI) measure of inflation. The report calls for short and long-term solutions to this.

In the short term, English cities should learn from the bus franchising system in London, where operators bid for route-based franchises to run services rather than private operators competing on the same routes. Professor Mike Waterson of the Centre for Competitive Advantage in the Global Economy (CAGE) at the University of Warwick says in the report that this system creates more effective competition between operators.

Some cities, including Manchester, are planning to copy London’s franchising model, which, the report says, may well prove beneficial. But better management of franchising “may provide only a relatively short-term (say five-year) boost to ridership,” the paper concludes.

In the long run, Professor Waterson warns, ministers will have to make more radical changes to promote bus travel and to meet environmental and congestion concerns.

One option is to emulate Germany’s Travel Expenses Act which will not normally reimburse expense-paid travel by taxi on public business. German federally-funded institutions insist that travel should only take place on public transport.

“Such a policy, if introduced in Britain (as regards at least to travel on the public purse), would lead to some modal shift. Radical moves such as this should be considered in Britain,” Waterson concludes.