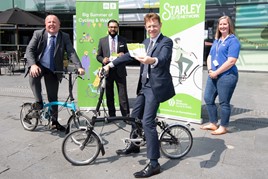 Transport for West Midlands (TfWM) will invest £260 million as part of its new Starley Network that will establish 500-miles of cycling and active travel routes across the region.

Local authorities will be adding to TfWM’s funding as they also invest in their local network. The majority of schemes will primarily be delivered by local authorities.

All 493 miles of the routes on the new network will be dedicated for active travel, with the ambition that the routes will either be traffic free away from the highway, or within roads but physically separated from traffic.

Local authorities have worked with TfWM, which is part of the West Midlands Combined Authority (WMCA), to link their local cycling plans into a region-wide network.

The new network has a new Starley Network Map to showcase the scope of the initiative.

Part of the plans also include a new cycle hire scheme that will serve the whole West Midlands Combined Authority area, with further details to be released in the coming weeks.

The launch of the Starley Network comes after TfWM recently launched its Roll & Stroll campaign, which aims to encourage more people to use two wheels and their two feet in light of the coronavirus pandemic.

The behavioural-change campaign offers practical support for new cyclists and those returning, as well as safety advice.

Andy Street, the Mayor of the West Midlands, said: “We are utterly committed to improving cycling infrastructure across the region, and active travel has a critical role to play in our future transport plans for the West Midlands.

“Cycling has enormous benefits, both for people’s health and the environment.

TfWM took the decision to enhance its cycling vision following a rise in the popularity of two wheels after the outbreak of the coronavirus pandemic.

The new network also incorporates pop-up cycling lanes that are being set-up by local authorities across the region, with the hope that more of these lanes will follow after a multi-million pound bid for further funding was submitted to Government last Friday as part of the second tranche of the Emergency Active Travel Fund.

Cllr Ian Ward, the West Midlands Combined Authority’s portfolio holder for transport, said: “What the Starley Network shows is how the seven metropolitan authorities, with the support of TfWM, have set out a vision for cycling across the region.

“It underlines the commitment of the seven councils to improving cycling facilities and infrastructure, and reinforces the work being carried out locally with the money secured by TfWM under the Emergency Active Travel Fund.”

Plymouth City Council has been awarded an ‘indicative’ £249,000 aimed at providing emergency active travel solutions as a result of Covid-19.

AppyWay has put together a guide to help English local authorities navigate the opportunities made available by the Government’s £225 million Emergency Active Travel Fund.