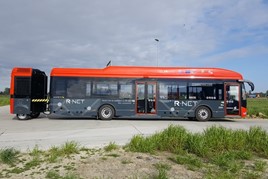 VDL Bus & Coach will deliver a batch of four hydrogen vehicles, which tow range extender trailers developed in collaboration with Bosch Engineering. The trailer configuration means the extra weight of the fuel cell does not compromise passenger capacity. With a full tank, they have a range of about 350km.

VDL has already delivered more than 100 battery electric buses to Connexxion, part of the Transdev group, which operates the concession for Schiphol airport, where the first large e-bus fleet in Europe started operation in 2018.

The four vehicles are the first hydrogen buses to be put into service in this concession. They were ordered several years ago, but commissioning was delayed due to laws and regulations regarding the use of hydrogen buses.

Bus drivers and mechanics were required to obtain special driving licences before being allowed to drive the new buses.

What about fuel cell electric vehicles? - a whitepaper by Capgemini

This whitepaper from Capgemini looks at the potential for fuel cell electric vehicles, in an industry where battery powered EVs are dominating the headlines.