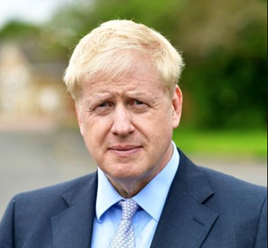 Prime Minister Boris Johnson has announced a new target to reduce the UK’s annual greenhouse gas emissions by at least 68% (compared to 1990 levels) by 2030, under the Paris Climate Agreement.

The UK’s previous target, known as the Nationally Determined contribution (NDC), was 53% and the change recognises the “urgency to further tackle climate change”, the Government said.

It comes ahead of the UK co-hosting the virtual Climate Ambition Summit on December 12, which will coincide with the fifth anniversary of the historic Paris Agreement.

The summit calls on countries around the world to submit ambitious NDCs or other climate plans ahead of the UN COP26 climate talks, which the UK Government is hosting in Glasgow next year.

This new target meets the recommendation of experts at the independent Climate Change Committee who advise the Government on emissions targets.

The UK’s path to meeting this target is backed by the Prime Minister’s Ten Point Plan for a green industrial revolution, which will create and support up to 250,000 British jobs by 2030.

Johnson said that the target is “faster than any major enconomy”, but that “this is a global effort” and "world leaders need to bring forward their own ambitious plans to cut emissions and set net zero targets”.

Business and Energy Secretary and COP26 President Alok Sharma added: “Tackling climate change is the one of the most urgent shared endeavours of our lifetimes, demanding bold action from every nation to prevent catastrophic global warming.

“As a country, we have demonstrated we can both rapidly cut carbon emissions, while creating new jobs, new technologies and future-proof industries that will generate economic growth for decades to come.”

While the new target has been welcomed by a number of organisations, including Anglian Water, Scottish Power, SSE, Tesco, Sky and BT, others are calling on the Government to put words into action.

The British Safety Council, which has been calling on the Government to improve air quality for thousands of outdoor workers through its Time to Breathe campaign, said that the Government’s target will only be met if it is "underpinned by tangible actions to deliver its ambition".

"Such actions include the Government adopting the World Health Organisation’s (WHO) air pollution targets, allowing electric only cars in cities from 2030 and improving air quality measurement across the UK", it said.