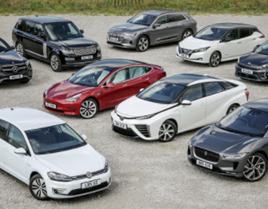 Over half of UK dealers (53%) plan to stock alternative fuel vehicles (AFVs) on their forecourts in the next five years, according to research from Close Brothers Motor Finance’s Dealer Satisfaction Survey.

Almost three in 10 (29%) car dealers already stock AFVs. For those who already have stock, two thirds (64%) plan to increase it and a quarter (24%) plan to maintain their current level. Just 2% of dealers want to decrease their current stock.

For dealers who do not currently stock AFVs, three in 10 (29%) plan to do so within the next year.

With the UK expecting a ban on all new emissions-vehicles by 2035, dealers are experiencing a shift in the expectations to stock more electric and low-emission cars.

However, some dealers remain unconvinced, with just under a fifth (18%) admitting that they don’t stock AFVs and don’t intend to anytime soon.

Seán Kemple, director of sales at Close Brothers Motor Finance, said: “It’s encouraging to see more dealers building up their stock and planning to do so over the next few years.

“As demand for affordable AFVs increases, dealers are reacting to buying patterns and listening to the considerations of consumers.

“The Government’s recent pledge to inject £500m into building up rapid charging hubs and zero-emission cars should be a great support for dealers overhauling their stock.”

Kemple said that despite this positive indication from the car retail industry, there is still a long drive ahead before the Government’s 2035 ambitions can be met.

He said: “The UK has the potential to be a world leader in AFVs, but only if the Government, manufacturers, dealers, and consumers all work together to ease the transition.”

The Government announced cuts to the plug-in vehicle grant during its March Budget, reducing the money from £3,500 to £3,000 per vehicle. It also ended the grant for premium EVs that cost more than £50,000.

Answers to the most pressing questions utility companies have related to the impact of electric vehicle charging on the grid is a report by fleetcarma, a division of Smart Transport member, Geotab.

BP Chargemaster, Pod Point and Ubitricity have paused all non-essential workplace and home charge point installations due to the COVID-19 pandemic.