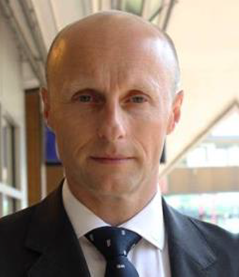 Byford’s most recent role was President and Chief Executive Officer of New York City Transit Authority, where he was responsible for 50,000 staff and devised a $40bn five-year investment plan to renew the city’s transport system.

He will join TfL on June 29, with current commissioner Mike Brown MVO staying on until July 10 to complete a hand-over process prior to taking up his new position overseeing the renovation of the Houses of Parliament.

Byford brings has worked within a wide range of complex stakeholder and political environments in a transport career spanning more than 30 years and three continents.

As well as his recent leadership role in New York, Byford’s previous positions include:

Byford takes up the post at a pivotal moment for the organisation and for London as TfL oversees a safe and sustainable re-start for mobility in the Capital.

Mayor of London Sadiq Khan said: “I look forward to working with Andy as we build a greener city with clean and environmentally-friendly travel, including walking and cycling, at the heart of its recovery.

“I would like to place on record my gratitude to Mike Brown for everything he has done for the capital since starting at TfL in 1989. I wish him the best of luck in his new role.”

Andy Byford said: “I am delighted to have been chosen to lead the organisation where I started my transport career over 30 years ago.

“In the wake of the Covid-19 pandemic, all transport authorities around the world will need to reimagine how their services and projects contribute to the safe and sustainable re-start of the social and economic lives of the cities they serve.

“It is a huge challenge, but I know that Transport for London has some of the best people anywhere in the world and we will meet these challenges and will together help build an even better city for everyone.”

Transport for London (TfL) is seeking Government investment following the publication of its draft business plan for the period from 2020/21 to 2024/25.

Transport for London (TfL) has appointed Baringa Partners as its strategic energy advisor to help put its decarbonisation plans in place with the aim of a zero-emission rail travel by 2030.