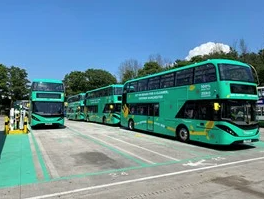 The investment in electric buses has been supported with £6.9 million in funding from the Department of Transport’s Ultra Low Emission Bus Scheme.

The buses are equipped with two charging points and each charger has twin 40kW AC feeds.

When combined, the 80kW supply means the buses can be recharged in three-and-a-half hours.

The system is built with expansion in mind, enabling Stagecoach to scale their energy needs, when further routes are electrified.

Elisabeth Tasker, managing director of Stagecoach Manchester, said: “This is a significant milestone in the history of transport in Greater Manchester and represents one of the biggest single investments in electric buses anywhere in Europe.

“It will deliver major benefits for our customers, the region and other road users in delivering greener transport on some of Manchester’s busiest roads.”

The Enviro EV400 bus is a joint venture between Alexander Dennis, which delivered the chassis, body and internal furnishings, while the batteries and drive train were provided by BYD. Each has a range of up to 190 miles and capacity to carry around 80 passengers.

Roger Brereton, head of sales at Pailton Engineering, weighs in on the debate for greater electric bus design standardisation.

The Department for Transport (DfT) has boosted its Covid-19 support for bus and tram operators in England by a further £256 million to £700m in total.