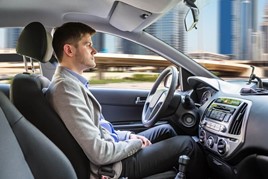 The Society of Motor Manufacturers and Traders (SMMT) has published a new set of guiding principles for responsible advertising and communication relating to automated vehicles and their capabilities.

The guidance has been agreed by the Centre for Connected and Autonomous Vehicles’ AV-DRiVE Group and will ensure consumers receive consistent and clear information regarding automated driving features, ahead of their expected introduction to British roads in 2022, says the SMMT.

Mike Hawes, chief executive at the SMMT, said: “The UK is at the forefront of the introduction of automated vehicles, which has tremendous potential to save lives, improve mobility for all and drive economic growth.

“It is essential that this revolutionary technology is marketed accurately and responsibly, and we are delighted to have brought together industry, Government and other key stakeholders to develop a series of guiding principles that will ensure consumers will have clarity and confidence over their capabilities from when these advanced vehicles first make their way into showrooms.”

The guiding principles state that:

Transport minister Trudy Harrison said: “It is essential that industry and stakeholders are clear on their responsibilities and developed in partnership with Government, motoring and road safety groups, the SMMT’s Guiding Principles are an important step to promote the safe use of automated technologies in the UK.”

A vehicle is “driving itself” if it is operating in a mode in which it is not being controlled, and does not need to be monitored, by an individual.

Matthew Avery, director of research at Thatcham Research, says that the guiding principles are a “key milestone” in ensuring there is no confusion around the capabilities of assisted driving systems and future automated systems, as well as the responsibilities of the drivers using them.

“We have long advocated consistency of terminology,” he added. “There are two clear states – a vehicle is either assisted with a driver being supported by technology or automated where the technology is effectively and safely replacing the driver.

“We urge manufacturers now to use simple marketing that does not over promise functionality and the key is for them to be delivered consistently across all marketing material, as well as through effective dealership education and their subsequent conversations and engagement with consumers.”