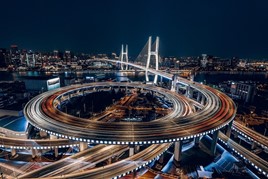 Shanghai has been named Smart City of 2020 due to its digital infrastructure, e-government services and the integration of information technology and industry.

The Chinese metropolis was crowned at the global Smart City Live 2020 expo.

Additionally, its e-government initiative has over 14.56 million users within a total population of over 24 million.

Other award winners included Microsoft and Siemens, which won the Urban Environment award for its Mindsphere City Graph platform.

The City Graph enables contextual integration and analysis within cities, districts or campuses.

The platform builds digital twins of real entities in a city and optimises city operations step-by-step, through Internet of Things (IoT) and advanced analytics.

The Toronto-based company has devised a software solution capable of converting a public transit fleet in a city from fixed route operations to a flexible on-demand service.

Drivers are guided through optimal one stop at a time, and users request rides to and from any transit stop in the area.

The solution has already been tested on the late-night fixed route buses in Belleville, Ontario (Canada) registering increases in riders and reducing vehicle mileage.

The City of Las Vegas has awarded SenSen a £2 million contract to provide intelligent transport systems and smart technology over the next five years.

The City of Edinburgh Council and global IT company CGI have extended an existing contract to work on smart city developments together until 2029.

The adoption of 5G in the transport and logistics industry could add £217bn in gross value to the global economy in 2030, according to STL Partners’ research.