Safety is ‘first priority’ to get people back on trains 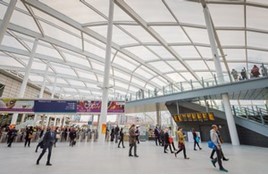 “Nothing worries me more than empty trains,” she said, opening her presentation at The future of rail infrastructure in the UK - CP6, the Integrated Rail Plan, and Delivering Modernisation virtual conference on February 4.

“I’ve seen reports of 80% of people think rail is unsafe - with buses it’s in the 70s. That first journey when back - and they will be back - they need to feel safe.

“Transport Focus work shows passengers want reliability, a seat and value for money. I think now safety will be the first priority.”

Hewitt offered anecdotal evidence of friends who were happy to fly on a busy trans-Atlantic flight during the Covid-19 pandemic, but who drove to the airport rather than catch the train because they believed it to be unsafe.

Tough choices also need to be made, she said: “We need to be realistic, we need to keep the current level of performance, and we need to embrace technology.

"I believe if we give passengers what they want, how they want it and they feel safe, then they will come back.”

Hewitt also believes the industry must work differently in the future, with the past year showing how timetables can be changed quickly.

“Season tickets, as we know them, are probably dead. So now it’s about how we use technology. Fares reform. Is there an opportunity to change things and wow passengers with a service they have not had before?”

She said there is a huge appetite from operators to do things differently around ticketing, adding that while people are quick to think about the costs, they should instead think about the opportunities for reform. She called on the industry to collaborate, stating that new contracts no longer set operators in competition.

Sustainability is also key in attracting people back to rail, although this was not just about decarbonisation, but also rail’s role in society, she said.

“We will have massive unemployment, so how do we connect those people to where there are jobs?”

Getting passengers off domestic flights should be another ambition, while integration with other transport modes such as cycling would also help, she said.

Hewitt also declared that rail, air and highways sectors tend to look in silos when it comes to usage, but instead need to look at how they can be linked.