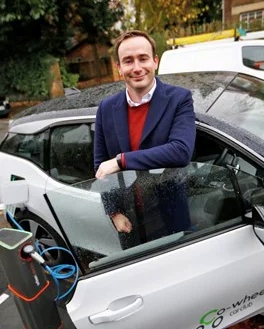 Oxford believes it will become the first UK local authority to set out a city-wide reduction target as it seeks to go further than the legal annual mean limit value for NO2 of 40 µg/m3, with a new local annual mean NO2 target of 30 µg/m3 by 2025.

The new local target mean does not override any legal targets set by central government, rather it sets out a target that the city aims to achieve.

Councillor Tom Hayes, deputy leader and cabinet member for green transport and zero carbon Oxford, said: “Through the City Council’s measures we have helped to reduce the most concerning air pollutant by 26% over the last seven years.

“We need to go further and faster to clean air and stronger public health.

“By setting a stricter target than the Government’s own target, we believe we are doubling down on our commitment to clean air, public health, and social justice.”

The Air Quality Action Plan, and the new local target will be subject to an annual review and each year progress will be reported in the Annual Status Reports (ASRs).

Oxford City Council has been calling on the Government to tighten the legal target and it has recently confirmed it will be setting new national air quality targets.

Part of Oxford’s action plan will be developing partnerships and public education; supporting the uptake of low and zero emission vehicles, reducing the need to travel and exploring opportunities for mode shift and increasing the uptake of sustainable transport.

The main priorities for the period 2021-2025 are focused on the delivery of Oxford’s Zero Emission Zone (ZEZ) and Connecting Oxford - two major schemes which have been developed to tackle road traffic emissions.

The Air Quality Action Plan 2021-2025 is to be presented to the council’s Scrutiny committee on September 1.

A public consultation on the document will also begin in September.

Oxford City Council is exploring ‘once in a generation’ improvements to to transform the city centre to make better use of public space.

Oxford City Council has started a trial of an electric refuse collection lorry (RCV) as part of its aims to electrify 25% of its 339 RCV fleet by 2023.