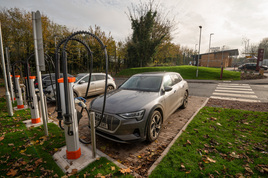 Osprey Charging has opened the first of 150 planned electric vehicle (EV) charging hubs at a site in Wolverhampton as part of a £75 million UK rollout.

The business has 10 new 150-175KW rapid charger hubs already under construction in other locations in the UK as part of its four-year rollout plan.

Each hub will be located on strategic A-roads and adjacent to motorways, hosting up to 12 high powered chargers.

The Wolverhampton hub features four high power rapid chargers that can add up to 100 miles of charge in 10 minutes.

Located adjacent to the A463, the hub will serve major transport routes in the area that see more than 130,000 vehicles pass by daily, and has a Costa Coffee on-site, allowing drivers to relax and make use of their facilities while they charge.

“The site, which deploys multiple high-powered chargers, will provide a blueprint for hundreds more right across the UK, meaning no waiting times for drivers and an overall outstanding customer experience.”

Osprey’s Wolverhampton hub is the first site in the UK to deploy Kempower technology, which enables more locations to host multiple high-powered chargers on a single site.

Kempower chargers work together to optimise charging across multiple vehicles when more than one EV is plugged in.

They allow power to be distributed based on demand, which varies significantly between individual vehicles due to the maximum charging rate of each model and its battery percentage at the point of charge.

This can reduce waiting times significantly, maximising the speed and availability of chargers for drivers.

Osprey says this technology also means grid connections can be optimised, allowing multiple high-power chargers to be installed per site and offering higher charging speeds without the need for more grid power.

The physical footprint of each charger is also reduced by 74%, allowing space for more chargers, improving accessibility and reducing their visual impact to support planning permission.

All Osprey chargers are compatible with every rapid charging EV on the market today and do not require a membership or subscription to initiate charging – drivers can tap their contactless bank card or smartphone.

Osprey Charging has announced £75 million investment to install more than 150 high-powered electric vehicle (EV) charging hubs across the UK by 2025.