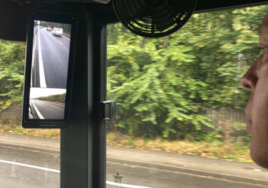 Bus operator Nottingham City Transport is replacing conventional wing mirrors on its fleet with a digital solution to improve safety.

The solution, from 21st Century, part of Journeo, uses a camera on the outside of the vehicle that is connected to monitors inside the driver’s cab.

As the cameras are much smaller than conventional wing mirrors, they are less likely to hit  trees, bus stops, pedestrians and cyclists.

21st Century said users of the Journeo Camera Monitoring System (CMS) have reported a 60% reduction in accident costs and a reduction in maintenance costs of almost 40%.

The system can be retrofitted to older vehicles, as well as new buses.

Liam O'Brien, head of engineering at Nottingham City Transport, said: “We are determined to  make our transport network as safe as possible for passengers and other road users and this project  is an important step in achieving this.”

Mark Johnson, director of fleet systems at 21st Century, added: “As a UK first this is an exciting  project.

“While CMS is mandated on all new buses in London, Liam and the Nottingham City Transport  team are proving that operators outside the capital can add this important safety technology to their existing vehicles.

“Because of the huge safety benefits that it brings, we are determined to support the industry to roll out this technology wider.”

21st Century Passenger Systems, part of Journeo, has been named as a supplier on Crown Commercial Service’s transport technology framework.

The DfT is pausing the rollout of smart motorways for five years while collecting data on the existing network and investing £900 million to improve safety.