No ‘silver bullet’ to get people back on the buses 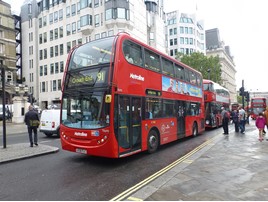 There is no single measure that would boost confidence in people returning to public transport, according to a major poll of Londoners.

The survey of more than 1,000 Londoners – conducted by YouGov on behalf of London First – found:

It shows that while 42% of commuters don’t plan on making any changes to their commute once the lockdown ends, 16% say they will not use public transport for the foreseeable future, and 22% say they will work from home more often. Almost a quarter (24%) of Londoners plan to use the tube, while 21% say they will use buses – this is down from 36% and 32% respectively before the lockdown.

The survey reveals a range of measures will be needed to improve public confidence in the transport network: a third of respondents say increased deep cleaning (33%) is in their top three measures to improve confidence, whilst a third also said extensive contact tracing (33%) and mandatory face masks (33%).

Caps on numbers using public transport at any one time (35%) and sanitiser available as standard (32%) would also help reassure passengers. Just over a quarter (27%) of Londoners also think there should be changes to office hours to offset traditional peak travel, which could reduce congestion and have an impact on air quality.

London First is calling for clarity and consistency across central government, London government and Transport for London to reduce the risk of over-crowding at peak times.

The group is also calling on Government to plug TfL’s revenue shortfall precipitated by the collapse of passenger numbers across the network.

“Many Londoners will need reassurance before getting back on public transport. Among the measures that would help passengers feel more confident in the safety of the network are caps on numbers, increased cleaning and the use of face coverings.

“Employers will also need to be flexible about work times and take steps to provide safe working environments for those staff who do return to work.”

“We need a clear package of measures and absolute clarity on who can travel and at what time if we are to get London back on its feet quickly.”

A cross-party group of MPs is demanding Ministers urgently upscale PPE for all transport workers in preparation for exiting the government-enforced lockdown.

Face masks will become the norm for passengers and staff as a consensus in protecting public health emerges among operators and transport authorities.