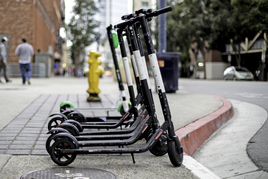 Transport secretary Grant Shapps has told MPs new legislation to govern the use of e-scooters will be introduced.

Declaring ongoing e-scooter trials as a success, Shapps said he would “crack-down” on the private market, making it illegal to sell e-scooters which do not meet regulatory standards the Government aims to introduce.

Shapps was appearing before the Transport Committee yesterday (Wednesday, April 27), where he defended the safety record of e-scooters and argued that the issue was around their illegal use.

It is legal to use an e-scooter on the public highway if hired through one of the Government’s trial schemes, however private use is strictly forbidden unless on private land.

Richard Dilks, chief executive of Collaborative Mobility UK (CoMoUK), said: “This is a welcome announcement from the Transport Secretary and we look forward to seeing the details of what is proposed.

“E-scooter trials have proven to be highly popular, with over 15million rides since summer 2020, and we must ensure the UK does not miss out on this opportunity to lower transport emissions. There is an imperative to improve safety because our laws currently do not define and recognise e-scooters, and we need standards for aspects such as their top speed, braking and lighting.”

RAC head of roads policy Nicholas Lyes said: “There’s little doubt that e-scooters have the potential to transform the way many of us move about, and potentially even cut the numbers of short journeys taken by car.

“Legalising private e-scooters is a big step though and it’s crucial their use is regulated to ensure the safety of both riders and everyone else using the roads.

“It’s also important that learnings are taken from the myriad of trials that are taking place across the country.”

Shapps comments to the Transport Committee come as fresh safety concerns around the extension of e-scooter trials have arisen with new figures from the Major Trauma Group revealing that NHS Ambulance Trusts across England, Wales and Northern Ireland were called to assist 82% more e-scooter related accidents during 2021 than throughout 2020.

A Freedom of Information (FOI) request sent to all NHS Ambulance Trusts showed that 713 e-scooter related accidents were attended by NHS ambulance vehicles during 2021 – an increase on the previous year’s figure of 392.

The data also reveals that the number of e-scooter accident patients being referred to A&E has increased by 40% between 2020 and 2021, with 173 patients treated at the scene of an accident being taken to their local A&E facility during 2021 compared with just 124 during 2020.

Regionally, Northern Ireland and the North-West saw the largest increase in the number of e-scooter accidents assisted by NHS ambulances, with a 700% and 200% increase respectively between 2020 and 2021.

All Ambulance Trusts that responded to the FOI request saw an increase in the number of e-scooter accidents attended.

Its research follows that from the the Parliamentary Advisory Council for Transport Safety (PACTS), which found that 15 riders were killed on UK roads.

The independent body collated records from the police, insurers and media for casualties involving e-scooters in 2021. This showed almost 900 casualties, with 20% involving injuries to pedestrians and cyclists.

The Department for Transport’s (DfT) own figures show that there were 484 casualties involving e-scooters in 2020.

The Major Trauma Group supports recent calls to bring forward legislation that would create a new powered light vehicle class in the UK.

The move, say campaigners, is designed to ensure e-scooters, whether rented in shared use schemes or privately owned, are subject to high safety standards, with many hundreds of thousands of unregulated vehicles already in use.

Trevor Sterling, chair of the Major Trauma Group, said: “It is essential that we address the serious safety concerns arising from e-scooter trials for the safety of all roads users.

“We must therefore bridge the gap in knowledge of the legal status of privately owned e-scooters and push for all types of e-scooters to be legal, with stricter safety standards implemented.”

Despite private e-scooters currently being illegal to use anywhere except on private land in the UK, the vast majority of parents in the study (85%) allow their children to ride their e-scooter in public areas, with three in four parents even allowing their children to use them on public roads.

The Royal Society for the Prevention of Accidents (RoSPA), however, is arguing in a new report, involving an e-scooter operator, that e-scooters are significantly less risky than many other forms of transport on Britain’s roads.

It covers data gathered by the Department for Transport (DfT) and provided by e-scooter operator Neuron for the 2020 period.

Figures showed that the overwhelming majority of incidents involving e-scooters (94%) took place in local authority areas that were not operating an e-scooter trial as opposed to areas with shared e-scooters available.

Shared e-scooter schemes tend to feature a range of safety innovations and stricter rules and regulations when compared to privately owned e-scooters which are currently illegal for use on public land.

Almost all incidents analysed as part of the study were confirmed to have taken place on the roads (94%), mostly on unsegregated single carriageways.

The vast majority involved a collision between an e-scooter and a larger powered vehicle like a car, truck or lorry.

The data also shone light onto the types of riders involved and the time of day incidents were most likely to take place, with the majority of collisions happening during daylight hours, between 2pm and 7pm, with peaks at 3pm and 6pm. Men (77%) were far more likely to be involved than women.

Nathan Davies, executive head of policy and portfolio at RoSPA, said: “This report shows that e-scooters compare favourably to other kinds of vehicles and do not represent any greater safety risk to other road users and pedestrians.

“However, there is still a lot of work that needs to be done to ensure they are integrated on our highways and make sure both e-scooter riders and cyclists are offered greater protections from motor vehicles, which were the source of the vast majority of incidents.”