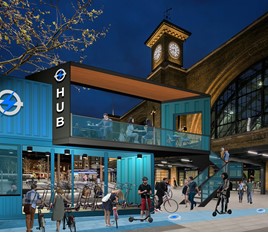 Better provision for micromobility (electric scooters, bikes and other personal transport vehicles) is needed at London's stations to give passengers more transport options, according to a joint research project by the London School of Economics and Political Science (LSE) and integrated transport consultancy Momentum.

The research, Investing in micromobility at stations: A London study of benefits and design options, suggests that giving people alternatives to using buses or the Underground for first/last mile journeys could make it a "realistic option" to board and alight at less crowded stations and reduce pressure on existing public transport services.

Improved connectivity via micromobility  would also increase the opportunity to develop at density in outer London and enable more new housing to come to market sooner, the study says.

This would boost the regeneration of areas surrounding stations and offer land development opportunities to Network Rail and Transport for London to "further diversify their revenue streams".

The study shows that major cities can successfully integrate shared micromobility at stations by:

The publication of the research follows a collaboration between the LSE’s Regional and Urban Planning Studies Masters programme, Masters student Max Meyers and Momentum Transport Consultancy to better understand the design and planning for micromobility at major London rail stations within the context of a need for a diverse offering of transport options in cities.

It questions how micromobility can fit into this picture, how stakeholders might best coordinate with one another and what design and policy changes would best mitigate any potential issues of micromobility.

Alan Mace, associate professor of urban planning studies at LSE, said: “Making public transport a positive choice over the private car depends on reducing the friction of the ‘last mile’, that inconvenient part between alighting from public transport and arriving at your destination.

"The burgeoning growth in micro-transport offers an exciting range of possibilities to address the challenge, but its potential will only be fully realised if we design an infrastructure to support it.

"This report contributes a range of innovative possibilities for the public and private sectors to plan for and build in that infrastructure.”

Roy McGowan, managing director at Momentum said: “The emergence of micromobility is providing an important opportunity for London to consider a more sustainable and equitable short-distance transport choice, when compared with using the car and private hire vehicles.

“With the ongoing trials of e-scooters for hire in several UK towns and cities, now is the time for key stakeholders to look closely at tackling operational, design and policy challenges - so that micromobility can achieve its potential as a highly-effective first and last-mile transport option, providing alternatives to London Underground usage and bus services, as well as potentially facilitating development at increased densities in outer London and contributing to improved human-scale public realm development.”

The Government has published responses to the Future of Transport Regulatory Review, which found “widespread support” for legalising micromobility vehicles.