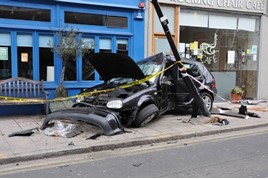 The Metropolitan Police, Transport for London and City Hall have published ambitious plans to reduce road deaths in the Capital to zero within 20 years. The initiative coincides with a significant increase in average road speeds in the Capital during lockdown.

The Vision Zero Action Plan is a joint initiative to drive societal change to make the aspiration reality by designing, maintaining, managing, operating and enforcing roads to reduce road danger and protect people.

Detective Superintendent Andy Cox, the Met Police’s lead for Vision Zero said: “Speeding is an absolute focus as it is the most prominent cause of fatal and serious crashes. Other themes targeted include the remaining fatal four offences: phone distraction, seatbelt, drink/drug drive and uninsured driving.

“To be effective; roads policing must have an intelligent focus on the few rather than the many by targeting the most risky roads; people and themes.”

Detective Superintendent Andy Cox will join other road safety professionals to run a session at Highways UK on November 4-5 on how the approach embodied in the Vision Zero strategy could be applied across the entire UK road network.

Insight from Ford’s smart data project could help city authorities reduce the numbers of people killed or seriously injured on the road.

A national campaign led by 20’s Plenty for Us has urged the Government to reduce urban speed limits from 30mph to 20mph to ease pressure on the NHS with fewer road casualties.