Homeowners urged to use charge point grant before it closes 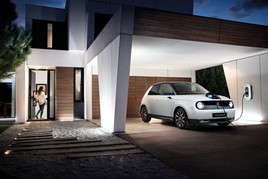 Drivers of electric vehicles (EVs) that have off-street parking have until March 31 to take advantage of the Government's Electric Vehicle Homecharge Scheme.

The EVHS provides grant funding of up to £350 towards the cost of a home charge point and the Office for Zero Emissions Vehicles (OZEV) will be focussing on increasing funding for those that live in rented accomodation after Q1.

As the deadline approaches, Rightcharge says it has seen a 100% rise in in the number of requests for charge point installs compared to last month, which was its most popular month to date.

Rightcharge is recommending that anybody requesting a charge point install via its site does so by the end of this month to ensure access to the grant.

Charlie Cook, founder of Rightcharge, said: “We’ve seen a 100% rise in in the number of requests for charge point installs between December and January which indicates that Brits are moving fast to take advantage of the OZEV (Office for Zero Emission Vehicles) grant before it’s too late.”

However, Cook explained: “We have been able to continue offering access to the grant through January, however, this may only last a few more days and we recommend drivers kick off their journey for a charge point install in January via our site to avoid missing out.”

The Government recently announced that developers will be required by law to install electric vehicle (EV) charge points in new homes, supermarkets and workplaces.

The Government estimates that up to 145,000 extra charge points will be installed across England each year thanks to these regulations.

The Government has cut the plug-in car grant by £1,000 and reduced the plug-in van grant by £500 in order to make remaining funds go further.

A FOI request to 400 councils has revealed drivers in the South are paying over a quarter more for EV charging compared with other areas of England and Wales.