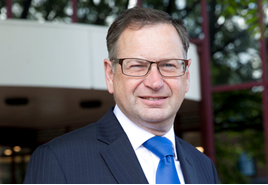 Highways England is searching for a new chief executive following Jim O’Sullivan’s decision to step down from the role early next year.

O’Sullivan, who was appointed in 2015, has led the company’s delivery of the Government’s multi-billion pound roads programme.

He said: “Together with the Department for Transport (DfT), our monitor ORR, Transport Focus and stakeholders across the sector we have done things that five years ago would not have been considered feasible.

“I leave Highways England well placed to deliver the second roads period and to prepare for the third.

“That makes it a good time to step down and I wish the sector and the company every success for the future.”

Highways England recently opened Britain’s biggest road project, the £1.5bn improvement of the A14 between Cambridge and Huntingdon, a key route between the East coast ports and the Midlands.