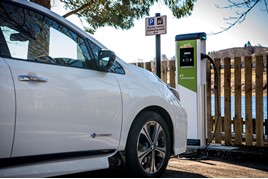 The team of internationally recognised experts, led by Cameron Hepburn at the University of Oxford, and including Nobel prize winner Joseph Stiglitz and well-known climate economist Nicholas Stern assessed the economic and climate impact of taking a green route out of the crisis.

'The COVID-19-initiated emissions reduction could be short-lived,' says Cameron Hepburn, lead author of the report and Director of the Smith School of Enterprise and Environment, University of Oxford. 'But this report shows we can choose to build back better, keeping many of the recent improvements we've seen in cleaner air, returning nature and reduced greenhouse gas emissions.'

The paper, to be published in the Oxford Review of Economic Policy, observes that desirable policies have a large return on investment, can be enacted quickly and have a strongly positive impact on climate.

Examples include investment in electric vehicle production and associated charging infrastructure, renewable energy production, such as wind or solar and superfast broadband.

Charles Donovan, Director of the Centre for Climate Finance and Investment, Imperial College Business School, says: 'Clean energy is not just affordable and reliable, it also offers the highest return on investment. Investors have a growing appetite to put money to work in sustainable finance. Governments need to re-write the rules so that they can.'

The 'COP26 Universities Network' has drawn on this research and other analyses to create a briefing for policymakers outlining a path to net-zero emissions economic recovery from COVID-19. The network, a growing group of more than 30 UK-based universities, was formed to help deliver climate change outcomes at the UN Climate Summit in Glasgow and beyond.

They have put together a briefing which identifies ten fiscal recovery policies that promise to bring both short-term high economic impact and long-term structural change to ensure the UK meets its 2050 climate goals.

'Currently, the UK directs EUR10.5bn in subsidies to fossil fuels. Reallocating this capital to jobs-rich renewable energy projects would be a win-win for the economy and environment', says Brian O'Callaghan, researcher at the Smith School of Enterprise and the Environment, University of Oxford.

Ajay Gambhir, Senior Research Fellow at the Grantham Institute for Climate Change and the Environment, Imperial College London, says: 'Some of the changes forced upon us by this pandemic – including far more homeworking and far less travel – have inadvertently given us a tantalising glimpse of what a future with quieter, cleaner streets and less stressful commuting might look like. Supporting these changes, through accelerated investment in home broadband and electric vehicles, as well as low-carbon, energy efficient homes, makes excellent economic and environmental sense.'

The environmental cost of the green transition - a report by DeepGreen

A coalition of researchers and scientists have released the findings of a year-long study into the impacts of sourcing metals to produce battery cathodes and wiring for electric vehicles (EVs).