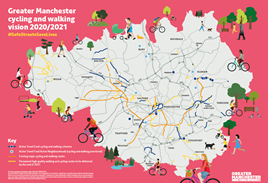 Greater Manchester is to add a further 24 miles of permanent walking and cycle routes with £15.97 million from the Government’s Active Travel fund.

The funding will see 25 schemes delivered across all 10 councils to provide safe travel options for the third of GM residents who do not have access to a car.

This second phase of routes will build on the initial £3.1m government funding, awarded to Greater Manchester in July 2020, which is already delivering 25 miles of pop up cycling and walking routes into town centres and the regional centre, as well as two pop up active neighbourhoods.

In addition, Greater Manchester has already committed to delivering 55 miles of permanent, high quality cycling and walking routes by December 2021.

“This latest funding will not only allow us to continue to do that, but to deliver permanent measures that will enable people to make the change long term, intrinsically linked to our plans to deliver the Bee Network – the UK’s largest cycling and walking network.”

Boardman said there will be consultations with residents to ensure routes are added in locations they are needed most.

Mayor of Greater Manchester Andy Burnham said the latest round of funding will support the long-term recovery from the pandemic and will reduce congestion and air pollution.

Burnham said: “I must champion the tireless efforts of our local authorities to develop and now deliver these schemes.

“It’s a huge vote of confidence that the Government gave us more money than we originally asked for.

“They clearly see great value in our ambitious plans to make Greater Manchester a true cycling and walking region.”

Councils across Greater Manchester are now working hard to complete the five-point plan set out by the Department for Transport in order for funds to be released.

This includes a public consultation on every scheme, reflecting the potential for the routes and active neighbourhoods to become permanent.

The plans align with the city region’s vision for a 1,800 mile long Bee Network; underpinning Greater Manchester’s long-term ambition to be a world class cycling and walking city-region.

Greater Manchester is launching a further public consultation on its proposals to reform the bus market; following a new report on the impact of Covid-19.