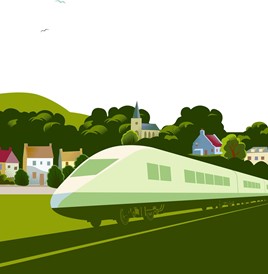 The Department for Transport (DfT) has awarded up to £50,000 each to 15 rail scheme projects in a bid to reconnect areas in rural England.

The £750,000 funding will kick-start work on schemes previously closed by the Beeching cuts of the 1960s.

The rail cuts, initially proposed by British Rail chief Dr Richard Beeching in 1963, saw passenger services ended on around a third of the rail network, with more than 2,300 stations closed and up to 5,000 miles of track axed across the UK.

The DfT's Restoring Your Railway fund will invest £500 million in total to reopen, restore and to make the case for new rail stations.

Transport Secretary Grant Shapps said: “For towns and villages left isolated and forgotten by Beeching cuts, restoring a rail line or a station has the potential to revitalise a community.

“It breathes new life into our high streets, drives investment in businesses and housing, and opens new opportunities for work and education.”

These latest projects to receive a share of the second round of the Restoring Your Railway ‘Ideas Fund’ will progress plans to deliver new routes and improved connectivity, as well as developing plans for new stations to areas poorly served by public transport.

Entries have been specifically judged on their ability to deliver real economic benefits and support left-behind communities, with investment targeted at regenerating local economies.

Rail Minister Chris Heaton-Harris said: “From restoring historic stations at Ferryhill and Langport, to reinstating passenger services on the Maid Marian Line and transforming rail connections around Bolton, Bury and Consett, our investment will provide the vital links that people depend on.

“Among the winning bids is a scheme to reinstate passenger services from Bolton to Manchester through Radcliffe with a radial Metrolink – running through some of the most economically deprived parts of the UK.”

A proposal for a Mid-Cornwall Metro has also been awarded development funding which would create a coast to coast through-service connecting the biggest towns in Cornwall – Newquay, Par, St Austell, Truro, Penryn and Falmouth.

The news comes as the Government launched £32 million of funding to deliver new stations in England and Wales, including Edginswell in Torquay, Thanet Parkway in Kent and St Clears in Carmarthenshire, with additional funding being invested to develop a further two in Haxby and Deeside.

Over the summer, proposals from MPs and local authorities for the second round of the ‘Ideas Fund’ were considered by an expert panel, including Heaton-Harris and Network Rail chair Sir Peter Hendy, after 51 bids were received earlier this year.

A further 28 bids will receive further guidance to help develop and refine their ideas for assessment in future funding rounds.

Riding Sunbeams has been awarded a £2.5 million grant to build and connect a solar powered energy plant that will directly power rail in East Sussex.

The Welsh Transport Commission has suggested using additional rail stations, rapid bus routes and cycle corridors as an alternative to the axed plans for an M4 motorway extension.

The leader of Havering Council has raised his concerns about further delays to the Crossrail project caused by a dispute between the government and Transport for London (TfL) over funding.