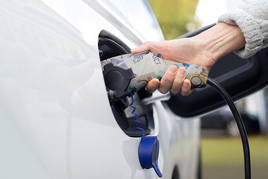 The Government has withdrawn the plug-in car grant (PiCG), which was worth up to £1,500 off an electric vehicle (EV).

All existing applications for the grant will continue to be honoured and where a car has been sold in the two working days before the announcement, but an application for the grant from dealerships has not yet been made, the sale will also still qualify for the grant.

Transport minister Trudy Harrison said: “The Government continues to invest record amounts in the transition to EVs, with £2.5 billion injected since 2020, and has set the most ambitious phase-out dates for new diesel and petrol sales of any major country.

“But Government funding must always be invested where it has the highest impact if that success story is to continue.

“Having successfully kickstarted the electric car market, we now want to use plug-in grants to match that success across other vehicle types, from taxis to delivery vans and everything in between, to help make the switch to zero emission travel cheaper and easier.”

Toby Poston, director of corporate affairs at trade body the British Vehicle Rental and Leasing Association (BVRLA), believes it’s right that the Government prioritises EV subsidies towards vans and charging infrastructure, where they are needed most.

However, he is concerned how cutting the plug-in car grant completely, could impact burgeoning EV sales. He explained: “Although the grant was small and only a handful of EVs were eligible, its withdrawal will be a symbolic moment that could damage confidence in the fragile EV market.”

Figures from the Society of Motor Manufacturers and Traders (SMMT), published last month, suggested that there are now more than 720,000 plug-in cars on UK roads. However, that equates to just one in 50 cars, despite a record one-in-five new car registrations now being electric.

The SMMT data also showed that most plug-in cars are registered to businesses rather than people, with more than half (58.8%) of all electric cars on the road company registered.

Poston said: “Most demand for EVs is being driven by the favourable benefit-in-kind tax rates available to workers in company car or salary sacrifice schemes.

“As inflation surges and business and consumer confidence falls, Government needs to maintain these incentives if the country is to have any chance of hitting its ambitious decarbonisation targets.”

The BVRLA is urging the Chancellor to support the uptake of electric cars by BIK tax rates low and by publishing them beyond the 2024/25.

Highlighting the success of the tax regime for electric cars to date, it has launched a campaign called #SeeTheBenefit on company car tax.

It is more than 11 years since the plug-in car grant was first introduced, when it offered up to £5,000 off a car with CO2 emissions of less than 75g/km.

However, as plug-in registrations have increased, the Government has moved to reduce the level of grant available or tighten the qualifying criteria, with increasing regularity.

Furthermore, hybrid electric cars, which had CO2 emission of less than 50g/km and could travel at least 112km (70 miles) without any emissions, were no longer eligible.

When launched in January 2011, there were just nine qualifying vehicles; some 24 electric cars had been eligible for the plug-in car grant at the last count.

Ashley Barnett, head of consultancy at Lex Autolease, welcomed the Government's focus on improving charging infrastructure along with recognition of the work that still needs to be done to boost levels of electric vans and trucks.

However, he said: "Removing the grant completely may impact EV affordability for these lower priced at a time when supply is constrained and market pricing pressures.”

Jon Lawes, managing director of Novuna Vehicle Solutions, says that the withdrawal of the grant signifies there is a real need to shift the focus from uptake, to addressing barriers of EV ownership, by continuing to develop the UK’s charging infrastructure.

"The number of required charge points already lags well behind the number of EVs on UK roads and based on the current rate of adoption this gap is only set to widen further,2 he said.

"Coupled with the removal of the grant, there is still a risk that UK drivers and businesses don’t have confidence in our infrastructure and it’s therefore vital that this latest Government pledge quickly translates into tangible, meaningful development of the charging infrastructure up and down the country.”