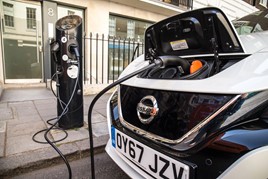 The Department for Transport (DfT) will neither confirm or deny rumours it is poised to announce bringing forward a ban on the sale of new diesel and petrol vehicles from 2040 to 2030.

The DfT was expected to reveal its plans as early as this week but a report in The Guardian citing sources within the transport and energy industry claims this has now been postponed to November due to the current focus on potentially reintroducing national lockdown measures due to the coronavirus.

Government consultation on introducing an earlier ban ended on July 31 this year.

When asked whether a 2030 ban had been decided, a spokesperson for the DfT told Smart Transport: "We have consulted on bringing forward the end to the sale of new petrol and diesel cars and vans from 2040 to 2035, or earlier if a faster transition appears feasible, as well as including hybrids for the first time.

“We are considering responses and will respond to the consultation, which will include any decisions taken, in due course.”

Christopher Burghardt, ChargePoint Europe managing director, welcomed a 2030 ban and said it would be essential for the Government's net zero ambitions.

Burghardt said: "Increasing the adoption of electric vehicles (EVs) is critical in the fight against climate change and we are glad that the UK government is considering bringing forward the end to the sale of new petrol and diesel vehicles to 2030.

"The UK government is making continuous steps in the right direction however, we need to ensure charging infrastructure remains a key focus in conversations to ensure this becomes reality.

"Charging infrastructure in particular is a tremendous way to accelerate mass adoption of electric vehicles and will make it easier for the public to adopt more environmentally friendly modes of transportation.

"After a decade of investment in high power charging along highways, it is time to expand charging deployment across cities, in rural areas while updating existing buildings and make them “EV ready“ as home and work is where about 80-percent of charging happens.

"We believe an important part of the answer is a fully interoperable peer to peer roaming solution and charging solutions that can scale with demand and are designed with consumers in mind."

Many in the transport and fleet industry would welcome a decision to ban petrol and diesel vehicles from 2030.

A coalition of UK fleets representing more than 400,000 cars and vans have urged the Government to bring forward the ban on new diesel and petrol vehicles.

However, the Society of Motor Manufacturers and Traders, has previously said that bringing forward the ban to 2030 would leave insufficient time for transition.

Mike Hawes, SMMT chief executive, said: "While we applaud the ambition, such a challenging timescale would be insufficient for the industry to transition, threatening the viability of thousands of businesses while undermining sales of today’s low emission technologies.

"The range of electrified vehicles on the market today is ever increasing – but we need a fully-funded strategy that mandates a massive investment in infrastructure, supports a competitive UK industry and encourages consumers to make the switch.

"Rather than safeguarding jobs and supporting the industry, pulling forward the phase-out date too much could have a devastating impact on the UK automotive industry which continues to invest heavily in both the supply and manufacture of low and zero emission technologies."

The SMMT does not want plug-in hybrids to be included in any earlier ban, with Hawes stating that hybrid technology will be critical to the transition to fossil fuel free motoring and they will be an "essential stepping stone" for many drivers to a fully electric vehicle.

Ride-sharing company Lyft has joined EV100 after committing to switch 100% of the vehicles on its platform to electric vehicles by 2030.