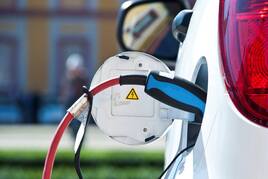 New electric vehicle (EV) charge points installed at home and in the workplace will be pre-programmed to switch off during peak hours to ease pressure on the National Grid.

In May, new charge points will not operate from 8am to 11am and 4pm to 10pm, but owners will be able to override the pre-set times to take account of night workers and people who have different schedules.

The Government said the time window is consistent both with its internal projections of expected EV demand, and with various external studies of EV charging patterns.

A new ‘randomised delay’ of up to 30 minutes will also be introduced at other times.

Public chargers and rapid chargers, on motorways and A-roads, will be exempt, reports The Times.

Tanya Sinclair, policy director for UK and Ireland at ChargePoint, said: “Concerns surrounding the UK’s grid to support the charging of electric vehicles is mounting.

“The challenge for the Government, and perhaps the wider electricity system, is ensuring the ‘smartness’ in every charger is actively used by consumers, and managing the load represented by the legacy charging infrastructure already in the field which is not smart.”

The National Grid has estimated that 80% of households with an EV will use smart charging by 2050 to help balance electricity demand.

It says that around 45% of homes will actively help to balance the grid, offering up to 38GW of flexible electricity to help manage peaks and fill troughs in demand.

Smart changing means EV owners can plug in their vehicles and a management system will top up the vehicle at times that will be most beneficial to manage energy demand.

News of the charge point 'switch off' follows after MPs on the transport committee warned that power cuts could be seen in parts of the country, unless EV charging habits change or the National Grid is strengthened.

In a report – Zero emission vehicles  – published by the transport committee in July, MPs set out a series of recommendations to Government to boost the production and purchase of EVs.

Last week, the Government announced it would legislate to ensure electric car chargers are built into all new homes and offices.

The move to a default off-peak charging setting was first mooted in a government consultation on Electric Vehicle Smart Charging, in 2019.

In its response to the consultation, published recently, it said that many respondents raised concerns about defining a specific off-peak time period in legislation, suggesting it could result in a secondary peak in demand.

Based on the feedback, it said it would adopt a more "nuanced approach" by mandating that smart charge points must prompt users to input a charging schedule and they must be pre-set to offer users a charging schedule that by default prevents EVs from charging at peak times.

During first use, the user must be given the opportunity to edit or remove this setting, it said. The user must also be able to remove or edit this default setting later.

It explains that mandating the setting of a default charging mode will help mitigate the risk that some users do not engage with smart charging offers, and instead charge during peak times.

Mandating that users must be informed of and prompted to edit the pre-set charging schedule during first use of the charge point will help mitigate the risk that any default setting causes confusion and negatively impacts the user experience, it adds.

The consumer override and edit functions will ensure that users can turn off or edit their charging schedule, for example where they wish to sign-up to a demand side response (DRS) such as a smart tariff.

Defining a peak time in legislation instead of an off-peak period could encourage greater variation in approach amongst charge point sellers, thereby helping to mitigate the risk of a default mode requirement causing secondary peaks in demand, it argues.

Ben Fletcher, associate director of EV at Moixa, said: "Concerns surrounding the grid being able to support charging of electric vehicles aren’t new and the Government’s proposed plans around smart charger capabilities are a good way of answering this.

“The challenge is ensuring consumers are given the right tools to put them in control, and allow them to intelligently charge in an easy, flexible way that is convenient for them.

"Intelligent EV charging not only allows individuals greater control over the power in their vehicle but also enables greater access to cheaper, greener energy.  In turn, this ensures that drivers can decide when they want their vehicle to be ready by and the system then optimises when the vehicle charges."

The Government said it will monitor the effectiveness of this approach "closely" as part of its post-legislation evaluation.

The upcoming 2021 Smart Systems and Flexibility Plan will outline the steps that Government is taking to help drive the uptake of smart charging offers, it said.

Virtual Smart Transport Conference: Barriers standing in the way of an all electric UK

Next week’s Virtual Smart Transport Conference will explore which barriers remain for the UK's plan to ban the sale of new petrol and diesel cars by 2030.