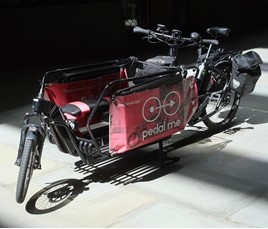 Electric cargo (e-cargo) bikes can deliver goods about 60% faster than vans in London, according to new research.

It found that, on average, the bikes were 1.61 times faster as they benefit from being able to take shortcuts through streets blocked to motor traffic and can quickly park up close to their destinations to drop off packages.

In addition to the time saving, the cargo bikes saved a total 3,896kg of carbon emissions and more than 5.5kg of nitrogen oxides across the 98 days of work that were analysed.

In places such as Germany and France, there are 100,000 and 50,000 cargo bikes purchased respectively, each year, compared to the 2,000 that were sold in the UK last year, which highlights the potential for growth, according to climate charity Possible, which commissioned the research along with the Active Travel Academy.

Ersilia Verlinghieri, senior research fellow at the Active Travel Academy, said: “With recent estimates from Europe suggesting that up to 51% of all freight journeys in cities could be replaced by cargo bike, it’s remarkable to see that, if even just a portion of this shift were to happen in London, it would be accompanied by not only dramatic reduction of CO2 emissions, but also contribute to a considerable mitigation of risks from air pollution and road traffic collisions whilst ensuring an efficient, fast and reliable urban freight system.”

"Delivery vans contribute significantly to worsening air quality and take up valuable space on our roads.

"We’ve seen home deliveries skyrocket during the Covid lockdowns and that trend is likely to continue. We urgently need to put on the brakes and reevaluate how goods move through our cities. Cargo bikes are one solution that we need to get behind. ”

Our next event: Exploring the roadmap to decarbonising transport by 2050

We’re be back, in-person, on Tuesday 30th November 2021 at County Hall, London, to reunite the transport community and explore the roadmap to decarbonising transport by 2050.

It’s your one chance this year to meet with a range of senior public and private sector transport leaders during interactive breakout sessions and group discussions.

Here's a sneak peak of the discussions you could be a part of...

Sarah Tooze is managing editor of Smart Transport. She has been a journalist for more than 10 years and won the ‘automotive business journalist’ award in the 2017 Newspress Awards. Prior to joining Smart Transport she was deputy editor at sister title Fleet News.

The successful delivery of Government funding, new active travel initiatives and the impact of Covid will help drive e-cargo trials in 2021.

The Department for Transport (DfT) and Energy Saving Trust have launched a new £400,000 funding round to help small businesses invest in electric cargo bikes.