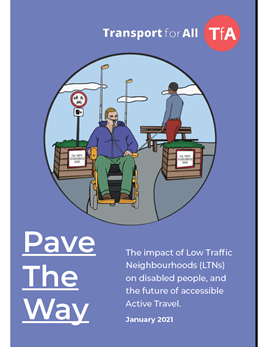 A Transport for All report into the impact of Low Traffic Neighbourhoods (LTNs) on disabled people has found failures with the consultation process.

LTNs are transport schemes which use bollards, planters and more to stop traffic going through specific roads in a local area, with the aim of encouraging more environmentally-friendly modes of transport, such as walking and cycling.

However, they have proved divisive in some neighbourhoods.

Transport for All spoke to 84 disabled people, aged eight to 89, across a range of impairment groups, who were based in 19 out of the 21 London boroughs that have implemented LTNs, plus five locations outside the capital.

The majority (72%) of participants reported issues with how changes were communicated, including the lack of information provided, its quality or accessibility, and not receiving a warning before an LTN was installed.

Furthermore, 77% reported an increase in journey times for residents, as well as their visitors who provide care and support due to them being reliant on a car.

There were also cases of a negative impact on mental health, issues with taxis and a perceived rise in traffic danger.

Some participants reported easier or more pleasant journeys, an increase in independence, and benefits to physical and mental health.

Given the benefits some have experienced, Transport for All does not believe that “ripping out” LTNs and “returning to ‘normal’ (how streets were before)” is the solution, pointing out that ‘normal’ “wasn’t accessible enough either”.

“The answer involves engaging with and listening to the perspectives of disabled people who have been significantly erased from the conversation,” it said.