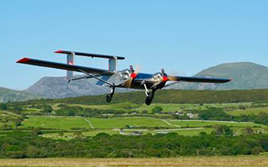 The Department for Transport (DfT) has fast tracked an £8 million UAV drone delivery service to start testing this week in response to COVID-19.

Transport secretary Grant Shapps, awarded £28m to Southampton and Portsmouth to develop a Future Transport Zone at the start of April this year.

As part of that initiative, £8m was earmarked for testing drones, and how they might be used for delivering goods in the years and decades ahead. This wasn’t due to start until next year.

Shapps said: “Of course, now we have an urgent need, so we’re making use of that testing programme as part of our response to COVID-19.

“As a result, I have fast-tracked trials to begin this week to carry medical supplies and equipment to St Mary’s Hospital, near Newport on the Isle of Wight.”

The new trial will use a UAV drone designed and built by the University of Southampton for Windracers, to transport medical supplies to St Marys Hospital from the mainland via the Solent Airport.

Solent Transport, in partnership with the University of Southampton and Windracers is advancing part of its four-year drone project, which will look to develop an air traffic management system to oversee the safe movement of both manned and unmanned aircraft in shared airspace.

Various types of unmanned aircraft will be trialled to see how these could improve the movement of medical supplies between the three hospitals in Hampshire – Southampton General Hospital, Queen Alexandra Hospital in Portsmouth and St Mary’s Hospital on the Isle of Wight.

The drone is a large, double engine, fix winged device with a carrying capacity of up to 100kg in a space around the size of an estate car boot.

In the initial operation it will be carrying loads of not more than 40kg and the type of cargo will depend on the needs of the hospital and subject to permissions granted by the Civil Aviation Authority.

Tom Cherrett, Professor of Logistics and Transport Management at the University of Southampton, said: “The concept of using drones to deliver medical supplies has been proven in countries such as Rwanda where they are helping to save lives by reaching isolated communities quickly and cheaply.

“The research we are embarking on over the next four years will investigate how such unmanned systems could be used in shared airspace and integrated within existing logistics operations in the UK.”

Grant Shapps, Secretary of State for Transport, has said the scale of the challenge for decarbonising transport in the UK requires a step change in scale and ambition to reach net zero by 2050.

Public consultation launched on drone delivery in the UK

A new drone delivery industry group has put together a White Paper to establish the steps required for the UK to launch the technology commercially in the UK.

The UK Drone Delivery Group has put a draft White Paper together to establish the steps required for the UK to launch the technology commercially in the UK.