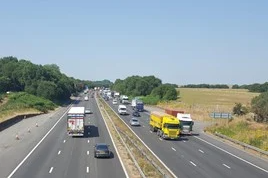 The new RAC survey of 3,608 drivers highlights how attitudes towards public transport have changed as a result of the pandemic.

Nearly two-thirds (64%) of drivers still expect to drive to offices or other places of work in the future after the Covid-19 pandemic is over.

In its annual Report on Motoring, the organisation says this is almost unchanged on the 67% who said they did so before the pandemic.

Just over one-third of drivers (36%) said they expected to work from home more frequently in the future as a result of the coronavirus.

The research also found 57% of drivers say having access to a car is more important than it was before the coronavirus pandemic, with reluctance to use public transport in the future at its highest level in 28 years.

Rod Dennis, RAC data insight spokesperson, said: “Even with lower traffic volumes, the pandemic appears to have reinforced the bond between drivers and their cars – with public transport less attractive than ever.

“Motorists see having access to a car as being even more important for the trips they need to make, be that shopping for essentials or getting out to see family and friends in other parts of the country when restrictions allow.”

Dennis said that without a concerted effort from Government and local councils, the pandemic risks putting efforts to encourage drivers out of their cars for some trips back by years.

He added: “Even before the coronavirus, drivers complained that public transport fares were often too high and services didn’t run when they needed them to.

“Now, for the first time since 2002, we have fewer drivers than ever saying they’re prepared to use public transport even if services improved – underlining just what a huge role the car continues to play in 2020.

The RAC suggested an evolution of the park and ride to include park and cycle, park and walk, or even park and e-scoot schemes.

Despite the rise in home deliveries, 68% of respondents said a car is essential for carrying items like shopping, up from 54% last year – perhaps partly driven by the rise in click-and-collect services and people carrying out fewer, larger grocery shops than before the lockdown.

Meanwhile, six-in-10 drivers (59%) say the car is essential for meeting up with friends and family who live elsewhere in the country, significantly up from 45% in 2019.

Last month, figures from the Department for Transport found the number of cars, vans and heavy goods vehicles on the country's roads are increasing beyond pre-pandemic levels at different times of the week.

Light and heavy commercial vehicles were at their busiest since national lockdown was lifted and they are significantly surpassing what would be typically expected at this time of year.

Van traffic, for example, was a fifth higher than usual, at some 121%, on Sunday September 13, while HGV usage was even higher at 123%. Both are running some 5% higher than expected volumes during weekdays.

The figures, from the Department for Transport (DfT), show car usage was also slightly above expected levels on Saturdays and Sundays at the beginning of the month. However, it was still some 5-10% down during the working week.

As the Covid-19 lockdown continues to ease, a survey of more than 2,000 UK adults has found 65% do not feel comfortable commuting to work via public transport.

The majority of passengers in the UK are concerned about using trains and buses due to Covid-19, according to new data from the DfT.