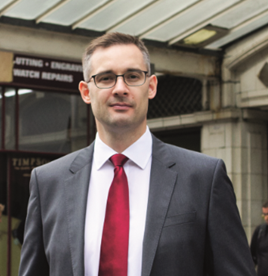 Campaign for Better Transport is looking for a new chief executive officer to replace Darren Shirley (pictured) who is moving to a new role at the Department for Transport.

Shirley, who joined the sustainable transport charity in August 2018, will head up the new Acceleration Unit, which has been created to speed up the delivery of Government transport programmes and projects post Covid-19.

He said: “It has been a pleasure leading Campaign for Better Transport for the last two years.

"During that time we have not only been able to develop a new strategy for the organisation to take it into the future, but seen huge wins for sustainable transport including a national fund for rail reopenings, billions to restore lost bus networks and an unprecedented Government commitment to active travel.

"Despite being a small organisation, Campaign for Better Transport continues to have a huge impact on the national transport agenda and I am sure our paths will cross in my new role; in fact I look forward to it.”

John Stewart, chair of Campaign for Better Transport said: “We will be very sorry to lose Darren but are honoured and delighted that he has been appointed to this important new role. We have started the process of seeking a new chief executive who will build on the first-rate work Darren has done.”