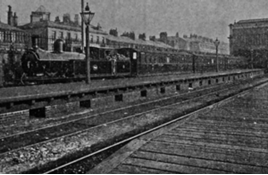 The Government is investing £500 million to kickstart the restoration of railway lines that were closed in the Beeching era cuts of the 1960s.

To launch the reversal scheme, the Government is also giving funding to develop proposals for re-opening two lines in the near future: £1.5 million to the Ashington-Blyth-Tyne Line in Northumberland and £100,000 to the Fleetwood line in Lancashire

Speaking on a visit to the Fleetwood and Poulton-le-Fylde line today (January 28), Transport Secretary Grant Shapps said: “Many communities still live with the scars that came from the closure of their local railway more than five decades ago.

“Today sees work begin to undo the damage of the Beeching cuts by restoring local railways and stations to their former glory.

"Investing in transport links is essential to levelling up access to opportunities across the country, ensuring our regions are better connected, local economies flourish and more than half a century of isolation is undone."

Recognising that not all growing towns can re-open previously existing stations, and that some areas may never have been served by rail, the Government has also launched a fresh round of the New Stations Fund.

Two previous rounds of the scheme have already helped develop 10 brand new stations across England and Wales. The new round will be allocated £20 million.

The Transport Secretary has invited MPs, local authorities and community groups across England to come forward with proposals on how they could use funding to reinstate axed local services. £300,000 has been committed to an ‘Ideas Fund’ to kickstart the process to encourage innovative ideas that will then be considered for further funding in the future.

The £500 million fund will help develop these proposals, and accelerate the delivery of schemes that are already being considered for restoration, making possible the reopening of certain stations and lines.

Funding is a "great start"

Welcoming the Government's announcement, Darren Shirley, chief executive of Campaign for Better Transport and Smart Transport board member, said: "There are far too many cut off communities which are suffering economically and socially as a result of poor transport links.

“Reconnecting an area to the rail network can change its fortunes and provide a much-needed economic and employment boost.

“That's why the £500 million announced today is a great start, but we hope to see more Government funding in the future to ensure that as many former lines as possible can be reopened.

"We are also pleased to see another round of the New Stations fund which has already successfully brought hundreds of thousands of people within walking distance of the rail network."