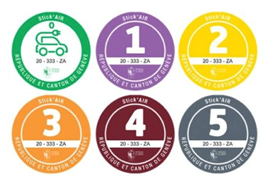 Geneva is introducing an environmental zone from January 15 next year to help tackle air pollution.

Activating the temporary environmental zone means that driving bans can come into force if high levels of nitrogen oxides, particulate matter and ozone are predicted or have occurred.

The temporary zone is activated during an air pollution peak with a few hours of advance warning and then applies between 06:00 and 22:00.

Only vehicles with the Stick'Air vignette ("Macaron") issued by the Canton of Geneva at cost price may drive into the zone.

As in similar temporary driving ban zones in France, during a peak of air pollution and as air quality deteriorates, other Stick'Air vignette classes are banned by the city authorities, so that only very clean vehicles can enter the city. If the increased driving bans are activated, public transport throughout the canton will be free of charge.

The Swiss government’s statistics link 3,000 deaths a year in the country to air quality and the new zone is an example of how cities are combating pollution with vehicle restrictions.

Failure to comply with the new environmental regulations may result in fines of CHF 500 (£390), with a grace period until March 31, 2020.

In addition to the 220,000 passenger cars registered in the Swiss canton of Geneva alone, foreign cars and trucks will also be affected by these regulations.

There will be exemptions for emergency vehicles, taxis and cars for people with disabilities.