Electric Volta Trucks to begin trials in London and Paris 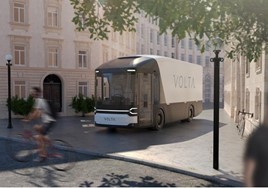 Electric trucks from Swedish startup Volta will begin on-road trials in London and Paris next year. The first prototype vehicles are expected to be revealed later this year.

The trucks will be custom-made, according to order requirements, and offer a unique ‘Truck-as-a-Service’ rental model. Volta’s rental model will offer contracts of seven years, lowering the cost-barrier for the technology switch. Volta offers an all-inclusive model including full installation of infrastructure, electricity supply, driver training, insurance, and repair services.

In addition to its environmental benefits, the manufacturer says that the removal of diesel engines has allowed it to radically redesign its vehicles, ensuring increased safety.

The driver’s seat is positioned in the centre of the cabin, creating an increased field of direct vision and allowing for entry and exit through sliding doors on both sides of the vehicle, away from passing traffic.

This also works to improve the vision of the driver, protecting cyclists and pedestrians, while preventing injuries caused from jumping out and climbing back into the truck.

Through electrification, Volta vehicles make 50% less noise and produce zero tailpipe emissions. As such, the vehicles will be permitted to operate in the most regulated urban areas, at all hours of the day, including night-time. This allows for optimised delivery time and the reduction of traffic in congested areas.

Carl-Magnus Norden, co-founder of Volta Trucks, said: “Heavy Good Vehicles are a significant contributor to pollution in urban areas and due to archaic, clunky designs, these have also grown to become some of the greatest safety hazards to pedestrians and cyclists. Innovation within transportation is underway, but the logistics and retail industries, though willing to change, are moving slowly due to a lack of good alternatives and so struggling to keep up with new regulations. Making it easier for fleet operators to go electric and improve the safety of the vehicles they use, we see that we are able to speed up the pace of positive change, to ensure safer and less-polluted cities.”