The future of data: Ten years of London Datastore 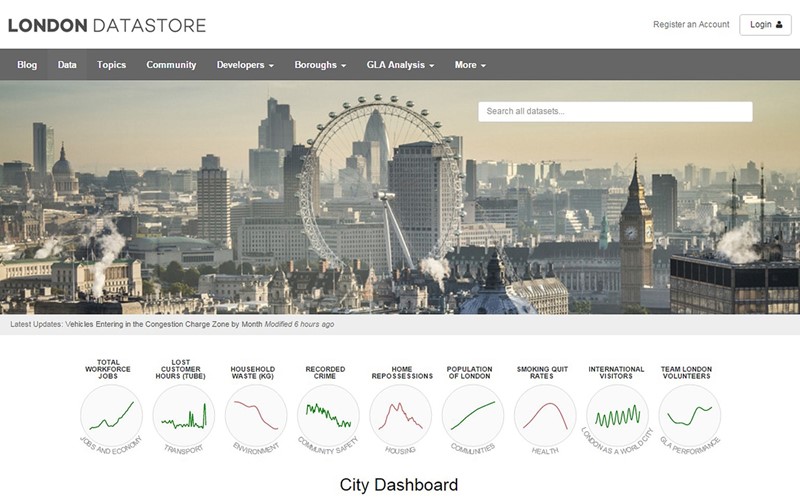 Created to make the city’s data widely available, it was one of the first of its kind developed by a major city.

There were two drivers for its creation, says Theo Blackwell, chief digital officer for London.

One was political, to create more transparency in public administration, and the second from within the organisation itself as a potential asset for policy analysis and development.

It would aid planning for London’s future, helping to answer questions such as where is regeneration needed, where areas of deprivation are, and where money should be spent?

In the early years improvements were added to make the data store more user-friendly, for example adding user dashboards.

In 2015 there was a reboot with added functions, and in 2018 a radical evolution when the ability to allow private data-sharing and data from sensors was added.

Data from sensors is a departure because it is dynamic and different in nature from the monthly or quarterly published statistical data which was the Datastore’s mainstay until then.

An example of an initiative sharing private data arose when data from utilities and private developers was brought together to create the Infrastructure Mapping App, which allows coordination of roadworks to minimise disruption and congestion.

Although the intention was to cater for data analysts, a number of applications have been developed to allow data to be visualised and used by a non-specialist audience and today users, of which there are about 60,000 each month, are split about 50/50 between the two groups.

In parallel, Transport for London (TfL) developed the Unified API, which opened a number of datasets for buses and trams.

This was “useful for innovation”, says Blackwell, and led to the creation of various travel planning apps as well as feeding into Google Maps, Citymapper and so on.

It estimated the release of open data by TfL directly supported more than 500 jobs and generated annual economic benefits and savings of up to £130 million annually for travellers, London and TfL itself.

A report by the Open Data Institute made recommendations for its evolution, including improving the “findability” of the data, increasing the variety and volume of data, documenting best practices, championing the adoption and development of standards and encouraging and facilitating collaboration.

Blackwell says originally the Datastore “was created without knowing what the user wanted. Now we want to create a datastore where we understand the needs of users – to change from being a product to being a service.

“London’s population will be two million larger by 2050: tackling issues such as congestion and poor air quality can only be done through data.”

﻿Read the full article on Data: what are the the opportunities and barriers? from the Smart Transport Journal