Can we really find transport solutions for everyone? 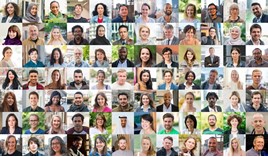 Policymakers have to consider the needs of the whole population when it comes to transport, but how well are they doing?

Creating a universal, inclusive and accessible transport system needs to be a priority at national and local government level.

The first step is for policymakers and transport operators to consider all the various groups who are currently reluctant to travel due to real or perceived obstacles, whether related to the car, bus, rail, tram, walking or cycling.

They need to consider: what are the challenges presented by each group and what are the solutions? What is the best way to move people around in each user group and how can that be achieved? Are there perceptions that need to beovercome?

Smart Transport Journal considers the needs of five user groups, with an overview of the challenges facing them all.

Disability affects around 19% of working age people, a proportion that rises as we age.

Disabilities come in many forms, from physical to sensory impairments, many of which, while perhaps invisible to the casual observer, can have profound impacts on people’s lives.

Despite longstanding disability legislation in the UK that trains and buses be accessible, too often they do not comply.

London Underground is considered one of the UK’s best providers for disabled travellers, as it allows them, like everyone else, to ‘turn up and go’ on their journey, in the knowledge that clear information and staff support are available.

Age – Both old and young

As we age, our reactions slow, our eyesight declines and, in many cases, so does our mobility.

This leads to a number of challenges across transport, but the impact, if it prevents people going out, is the same.

Once you stop going out there’s a quite rapid decline in physical and mental health and wellbeing, because your horizons close in and because you aren’t meeting and talking to people.

One-in-six people in England will experience a mental health problem in a given week, while severe mental illness affects 500,000 adults in England.

According to Anxiety UK, “being able to successfully use transport is one of the key determinants of the extent and speed of a person’s recovery from a period of mental ill health” .

The general confusion, crowdedness and noise of transport hubs can be massive stress triggers.

The term describes a lack of access to education, work, healthcare and shops because someone needs, but can’t afford, a car to get around, while public transport is either too expensive or unavailable.

Cycling and walking are cheap options, but road safety is often worse in the poorest areas, which tend to have larger roads and more people walking and cycling, because that’s what they can afford to do.

Perceptions of danger, both from traffic and anti-social behaviour, can prevent people going out, leading to greater isolation.

Gender disparity is also apparent in cycling where, in the UK, men make 2.5 times as many trips as women.