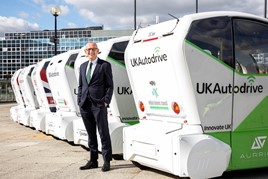 It evaluated seven connected vehicle technologies, some of which could be rolled out almost immediately, while others – as the project’s final report concludes – remain works in progress.

Led by Arup with support from more than a dozen public and private sector partners, the project took place on the public roads (and pavements) of Coventry and Milton Keynes.

In the near to mid-term – thanks in part to new rules approved by the European Commission this year – connected technology is likely to have a more immediate impact on UK drivers than wholly autonomous vehicles.

Electronic emergency brake light: Provides a warning when a vehicle ahead suddenly brakes – especially useful when driver is unable to see the lights of the vehicle in front due to weather conditions, road layout or other vehicles in between.

Conclusion: has “strong potential” to reduce road accidents, although more refinement is needed.

Conclusion: effective and could be introduced in the near future.

Intersection movement assist: Warns the driver when it is unsafe to enter an intersection, due to a high probability of collision with other vehicles.

Conclusion: worked within the parameters of the trial (which focused on T-junctions), but real-world is more complex.

Conclusion: the most futuristic as it relies on 100% of cars being connected.

In-vehicle signage: Sends information about road conditions, congestion or incidents direct to the in-car display, rather than relying on expensive gantry systems.

Collaborative parking: Provides real-time information about free parking spaces either in the vicinity or close to the driver’s final destination.

Conclusion: could be introduced in the near future.

By the end of the project, the manufacturers had made major progress in terms of autonomous vehicle (AV) capability, but the trial also highlighted a number of challenges in the path of AV development.

These include: synchronising the processing speeds between different elements of the AV ecosystem so they all operate within the same timeframe, pedestrian avoidance, dealing with potholes and relying solely on GPS to keep vehicles in the correct lane.

The trial’s pavement-based Aurrigo self-driving pods are the type of last-mile technology which could solve the challenge of connecting various transport modes for both passengers and parcels for a commercial rate as low as £3 per journey.

The project report says this new class of vehicle blurs the lines between public and private transport.