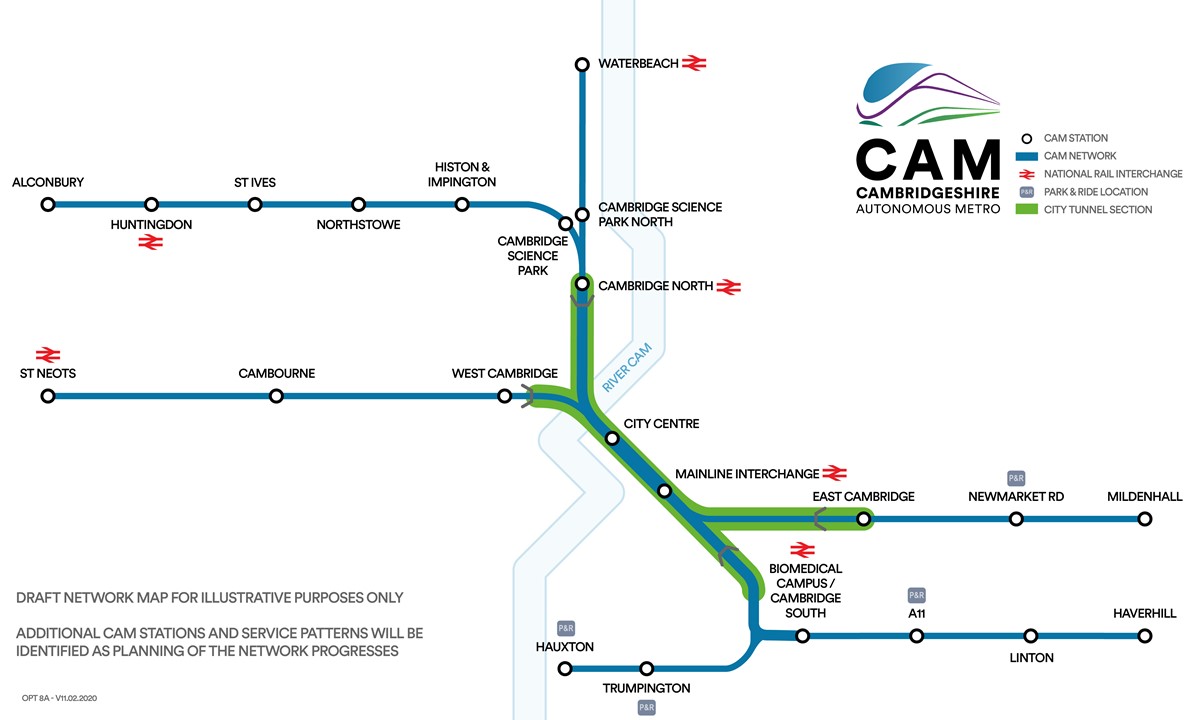 Cambridge and Peterborough Combined Authority is looking to use autonomous vehicle technology to create a public transport network of the kind expected in a major city at a fraction of the cost.

Cambridge’s economic progress has grown exponentially over the past 40 years as the best scientific companies and academics have been attracted to the city alongside international life sciences and technology businesses keen to recruit some of the best minds in the world.

However, house price increases in the centre of Cambridge have displaced many residents who now commute by car from towns and villages on the outskirts, leading to a congested rush hour full of idling vehicles, flanked by a flow of irritated cyclists.

Mayor James Palmer thinks the Cambridgeshire Autonomous Metro (CAM) is the solution to linking the garden towns, hospitals and science parks surrounding Cambridge to the centre of the city, without the level of investment or disruption caused by something like a light rail system or a dual carriageway ring road.

The radical project would tunnel under Cambridge to create a network of dedicated roads that use what would likely be linked autonomous electric pods to transport commuters from an initial four locations by 2030, to an expanded 23-stop route in the future.

Palmer wants to eventually link the whole of Cambridgeshire, including Peterborough with CAM.

These pods would be driverless, run 24 hours a day and would use dedicated tarmac roads, rather than any kind of rail system to provide transport, initially for 7,000 passengers an hour.

Cambridge has a population of around 130,000 and so creating a public transport system that works for what is a relatively small population, that also has the ability to scale for future growth has been one of the key challenges facing the scheme.

Palmer says: “The traditional thinking is that you need half a million people or more to enable a world class public transit system.

“We think through technology, drive and ambition we can challenge that and make something uniquely suited to Cambridge that can stand up to Berlin, Tokyo or San Francisco.”

Given CAM is unique and there is no precedent for this kind of transport system, Palmer says that can make it difficult for sceptics to understand.

The combined authority has formed a Special Purpose Vehicle (SPV) called One CAM to help deliver the scheme and this is chaired by renowned civil engineer Lord Robert Mair.

Lord Mair’s experience includes being involved in the design and construction of London’s Jubilee Line Extension, HS1 and Crossrail.

One CAM is also currently recruiting a chief executive to join the scheme.

One of the additional challenges about a driverless public transport system is that, as it stands, UK law would currently prohibit this system.

The success of CAM is also based on the assumption that the Government will progress with introducing new legislation to allow the testing and operation of fully autonomous vehicle technology within the next 10 years.