Walking: It's a radical act 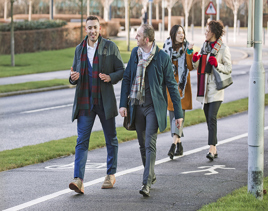 Peter Overstall owns a very special writing desk that belonged to his great grandfather. The inscription reads “presented to Mr George Overstall by the ratepayers of Rawtenstall as a token of respect for having served 7 days in Preston Gaol rather than submit to a fine of sixpence for vindicating the rights of the public to a footpath Pikelaw, Jan 10th 1873”.

George, a Methodist lay preacher, and his friend Mr Chippendale, were both gaoled for defending the public right to a footpath in Pikelaw, Lancashire, by demolishing an obstruction set up by local landowners.

On their release from prison they were met at Rawtenstall station by a large crowd and a brass band playing ‘See the Conqu’ring Hero Comes!’ They were carried in triumph to a reception where they were each presented with a writing desk to mark the occasion.

This small, but brave, act of civil disobedience predated one of the most famous protests to assert people’s walking rights, the Kinder Mass Trespass in 1932.

Living Streets has been awarded £40,745 from the European Climate Foundation to develop its approach to D&I within its campaigning network.