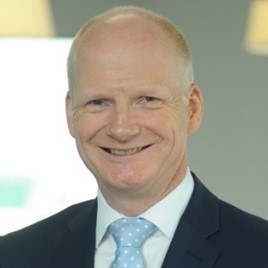 The recent speech by Prime Minister Boris Johnson putting jobs and infrastructure at the centre of the government’s economic growth strategy is welcome.

But the challenge currently faced by industry is less about his stricture to ‘build, build, build’ and more about ‘action, action, action,’ says David Barwell (pictured), AECOM’s chief executive officer, UK and Ireland.

Invoking the 1930's New Deal, former US President Franklin D Roosevelt’s response to the Great Depression, Mr Johnson promised to act fast to boost spending on infrastructure, a traditional remedy for economies in difficulty, and to use investments to level up the UK economy. Both moves are welcome, but the focus needs to be on translating political rhetoric into actual delivery and to ensure that the right projects are prioritised, particularly those that reduce carbon emissions.

The scale of what’s required is immense. In addition to the £5 billion of capital investment projects brought forward, the government has already promised to pump more into its economy than during the decade-old financial crisis, and the long-awaited National Infrastructure Strategy foresees spending £100 billion over this parliament.

It’s also an opportunity to fix things which may have long needed fixing, or to transform communities for decades to come. Underneath the headlines will come important choices about how to spend the money. Those decisions will impact the speed and depth of recovery, influence the longer-term health of our economies, and begin to define what our new normal is likely to be once the coronavirus is abated – hopefully for good.

Too often in the UK, projects take years to implement, caught up in red-tape and bureaucracy. Addressing such bottlenecks – as the government’s Project Speed taskforce is designed to achieve – could free up the economy with immediate effect.

Projects that have been delivered during the pandemic show what could be achieved. The temporary NHS Nightingale field hospitals have proved the industry has the skills and agility to deliver a more modern, efficient healthcare system and lessons should be learned about what collaboration and accelerated decision making can bring.

The Northumberland Line is a great example of how this can be achieved. Through innovative funding models and close cooperation with local authorities and Network Rail, this project will see passenger services reintroduced on an existing freight line, delivering economic benefits of up to £470 million.

The UK2070 Commission, an independent inquiry chaired by Lord Kerslake into city and regional inequalities in the UK, launched its final report just before lockdown. It presents a clear vision for the need to level up the country for the renewal of the whole of the UK, highlighting the inequity between cities, their suburbs and regional towns across the country.

Adding to existing relative deprivation and lack of opportunity, coronavirus has hit the poorest hardest, both in terms of health and economy. The Commission’s findings are therefore more important than ever if we are to build back a better and more equitable society.

The focus, reiterated today by the Prime Minister, on regional balancing is welcomed, but is shouldn’t be seen as a North versus South issue with Project Speed likely to focus on projects in North, Midlands and devolved nations.

Levelling up is also about addressing regional inequalities and boosting the capacity of the whole country to grow, but should not translate into the ‘balancing down’ of London. The sustainable growth of the South East economy is a critical component of UK’s wider economic recovery.

Long-term projects such as the high-speed railway line HS2 and the strategic transport partnership Transport for the North are as important as ever, and the government should continue to back them. Strategic regional rail projects also have an integral role to play in helping the country level up, creating regional transit-oriented corridors to link smaller towns and communities into a city region network.

To ensure a sustainable recovery, we recommend harnessing the current appreciation of the environment to support the drive towards zero carbon emissions. AECOM was one of more than 200 leading UK businesses calling on the government to ensure the recovery doesn’t compromise social, environmental and climate goals. In an open letter, CEOs said: “We must use the recovery to accelerate the transition to net zero. Efforts to rescue and repair the economy in response to the current crisis can and should be aligned with the UK's legislated target of net zero emissions by 2050 at the latest.”

Today’s announcement talked of planting trees, which we welcome. But a comprehensive approach to green infrastructure which properly values natural capital and delivers real environmental net gain is needed to underpin our zero-carbon revolution.

The government’s longer-term plan, when it comes, also needs to reflect on the changes to workplace, living and movement that will come out of coronavirus. Metro Transit Oriented Developments, which maximise the amount of residential, business and leisure space within walking distance of public transport, should be prioritised and encouraged. As well as encouraging sustainable transport, such developments will help breathe life into town centres and local high streets, which will be increasingly the focus of communities and work life.

The Organization for Economic Cooperation and Development estimates that an investment-led stimulus of half percentage point of gross domestic product leads to average long-term output gains between 0.5 to 2% in the large advanced economies.

Although it has been investing more than its European counterparts in infrastructure in recent years, the UK has still not caught up after years of under-investment, according to a 2019 report from the Office for National Statistics (ONS).

This impacts competitivity: in the World Economic Forum’s 2019 World Competitiveness Index, the UK ranks 9th overall – a slide of one place since 2018 – but 11th in terms of infrastructure.

The Prime Minister’s reference to Roosevelt’s New Deal is relevant here. In contrast to the series of projects announced today, the New Deal was a programme of nationwide investments with clear planned outcomes. To make the most of its spending, what the UK needs is a plan.

‘Shovel worthy’ projects with clear objectives of levelling up the country and delivering infrastructure for the 21st century should be afforded as much priority as ‘shovel ready’ ones that can be quickly implemented.