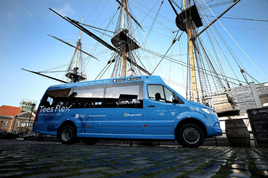 ViaVan, the joint venture between Via and Mercedes-Benz Vans, has launched a new on-demand transport service in the Tees Valley in partnership with Stagecoach Group.

The new Tees Flex service will run as a pilot for the next three years and is powered by nine new Mercedes-Benz Sprinters, funded by the Tees Valley Mayor and Combined Authority.

Service began on February 24 across three zones: Darlington and Stockton; Hartlepool; and Redcar and Cleveland.

Users can request a ride within the service areas, and to destinations outside the designated zones, including train stations and hospitals. Tees Flex will also serve Teesside International Airport.

If the pilot is successful there is scope for it to be expanded for the region even further.

The service aims to provide transport for residents in more isolated communities across the region, with rides costing as little as 50p — or even free for some residents.

Using the new Tees Flex app, riders will be able to hail a ride in a Mercedes-Benz Sprinter directly from their smartphone, via a website, or over the phone.

ViaVan’s algorithms will enable multiple riders to share the vehicle. The technology will direct passengers to a nearby stop location within a short walking distance for pick up and drop off.

Chris Snyder, chief executive of ViaVan: “Over the next few years, we’re increasingly going to see cities and towns asking how they can provide their residents with transportation that provides the same ease and convenience as private car ownership, and yet still achieves the same environmental and congestion-reducing benefits of mass transport.”

Ride sharing company ViaVan and Shell are working together on a system that will help manage electric fleets.

Slide, a new on-demand bus service, has started a 12 month trial in the west London borough of Ealing.