Via launches in Dubai with on-demand public transport service 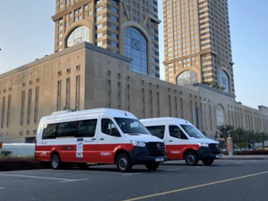 Via, the mobility solutions developer, has a new on-demand bus service in Dubai.

The new Dubai Bus on Demand service has been launched in partnership with United Trans, a transportation operator, and Dubai’s Roads and Transport Authority (RTA), following a successful trial operation phase.

The trial was measured on accessibility to riders, response time and transit time. A survey was carried out at metro stations to screen the needs, ideas and views of residents about the service before the full operation.

Daniel Ramot, co-founder and chief executive of Via, said: “Dubai Bus on Demand service is an excellent example of how public transportation and technology can work together to make a city smarter.”

Riders using the Dubai Bus on Demand app will be able to hail a vehicle directly from their smartphone in specific zones surrounding major transportation hubs.

Via’s algorithms enable multiple riders to share the vehicle. The technology will direct passengers to a nearby virtual bus stop within walking distance for pick up and drop off.

Via is now working with nearly 100 partners in more than 20 countries to help connect more people to transit including the Los Angeles Metro, Transport for London (TfL), Sydney’s Transport for New South Wales (TfNSW), and Berlin’s Berliner Verkehrsbetriebe (BVG).

ViaVan, the joint venture between Via and Mercedes-Benz Vans, has launched a new on-demand transport service in the Tees Valley in partnership with Stagecoach Group.