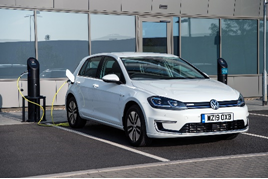 The benefits of managed charging – whether by users being incentivised to charge at set times or suppliers controlling charge times – have been demonstrated in a TRL trial.

More than 200 consumers took part in the eight-week trial using either a battery electric  vehicle (BEV), the Volkswagen eGolf, or a plug-in hybrid electric vehicle (PHEV), the Golf GTE.

They were split into three groups:

Their charging behaviour at home was recorded from their charging unit while telematics data from the vehicles recorded vehicle usage and away from home charging.

It was anticipated that charging behaviours might differ at weekends because of potentially greater behavioural flexibility, so these measures were recorded separately for weekdays and weekend days.