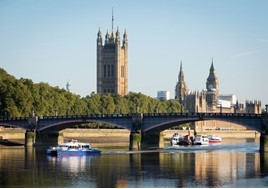 Transport for London (TfL) is planning to remove roundabouts at each end of Lambeth Bridge to introduce more pedestrian and cyclist friendly traffic measures.

The changes follow on from public consultation on how TfL could make walking and cycling across the bridge that connects Westminster and Lambeth less intimidating.

Construction work won’t begin until 2022 and isn't expected to be completed until 2024, but when finished it will remove both roundabouts, converting them into crossroad junctions, with traffic signals and signalised pedestrian crossings.

At each junction, dedicated space will be given for people cycling and wider footways will create more space for people walking.

Nigel Hardy, TfL’s head of healthy streets investment and delivery, said: “Enabling more people to walk and cycle is a vital part of our plans to tackle congestion and poor air quality.

“Changes at Lambeth Bridge will create a much-needed new safe cycle crossing over the Thames and make it much easier for people to get around the area by bike.”

Will Norman, London’s walking and cycling commissioner, said: “The changes will enable many more Londoners to switch to greener ways of getting around our city, helping clean up air toxic air and tackle the climate emergency.”

TfL and the Mayor of London recently announced that the amount of protected space for cycling in London has tripled since May 2016, several months ahead of schedule. More than 160km of lanes are either completed or under construction.

Construction work currently underway across London includes Cycleway 4, a new route in southeast London between Tower Bridge and Greenwich, and Cycleway 9, a 15km segregated route between Brentford and Olympia in west London.

The latest TfL figures show the total distance cycled in London on an average day in 2018 saw the highest growth recorded since monitoring began in 2015, increasing by almost 5% from the previous year, while the distance cycled each day exceeded four million kilometres for the first time.

TfL awards over £400,000 to fund walking and cycling schemes in London

Transport for London (TfL) has awarded more than £400,000 of grants to 60 community and not-for-profit groups that encourage local people to walk and cycle more.