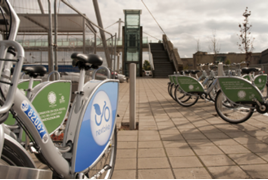 St Modan’s High School, joins Bannockburn, Stirling, and Wallace, in the first school-based bike share scheme in the UK – making it free for pupils aged 14 and over to bike to class.

The first three school stations were launched during Bike to School week in September, with the station at St Modan’s going live earlier this month, thanks to a £103,560 grant from Transport Scotland.

Forth Environment Link said more than 200 pupil journeys have taken place since the launch.

Mairi McIntosh, project officer at FEL’s Stirling Active Travel Hub, said: “Active youngsters are much more likely to become active adults, so we’re making it as easy as possible for teens in Stirling to cycle more.

“The scheme gives them free access to a bike, whether for cycling to school or getting around the city. We’re also offering every pupil who signs up half a day’s cycle training and a voucher for a bike helmet to help keep them safe on the roads.”

The school bike share stations are an extension to the Nextbike scheme which already operates in Stirling. Each school has 10 bikes, as well as access to the 200 bikes stationed across the city.

Recyke-a-bike is responsible for the maintenance of the bike fleet.

Normally, Nextbike memberships are only open to those aged 18 and over.

Krysia Solheim, Nextbike UK managing director, said: “We know that if sustainable transport options such as cycling are adopted from an early age, it can help to form habits that last a lifetime and we’re hoping that’s what will happen in Stirling.

“It’s vital that we all start thinking about reducing our own carbon emissions, regardless of age. The scheme is free for pupils to join for the first 12 months and rides won’t cost them a penny if they keep their rental time under an hour.”

Transport for London (TfL) has started construction work on a 1.6km stretch of its 10km segregated Cycleway route between Tower Bridge and Greenwich.