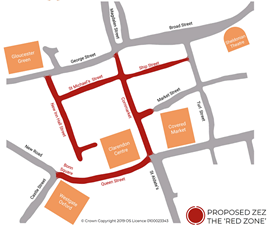 Oxford is set to become the first city in the UK to introduce a Zero Emission Zone (ZEZ), banning all petrol and diesel-powered vehicles from entering its city centre.

Oxford City Council and Oxfordshire County Councils have now published their final draft proposals for the ZEZ, to be introduced later this year.

The councils first published their ZEZ proposals in 2017, stating that Oxford city centre currently had illegally-high levels of toxic nitrogen dioxide, which contributes to diseases including cancer, asthma, stroke and heart disease.

The move is set to cut the nitrogen dioxide level in Oxford city centre’s most polluted street, George Street, by 74% by 2035 – bringing it well below the legal limit.

The proposed Red Zone marks the next step towards cleaner air in Oxford, and a dramatic reduction in the health risks for people living and working in the city. It is also expected that the ZEZ will improve air pollution levels in towns and villages across Oxfordshire because the buses and taxis and other vehicles that serve Oxford also serve towns and villages across the county.

In addition, a Green Zone is proposed for introduction in 2021/22, covering the rest of the city centre.

Both councils have now launched an informal consultation on a draft final scheme for the Red Zone, including the proposed charging and enforcement arrangements, which could begin in December 2020.

The key points of the latest proposals are: