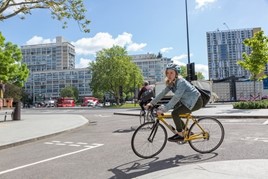 The NHS has announced measures to address the climate “health emergency”, including active travel, the use of electric vehicles and reducing mileage.

Air pollution is linked to killer conditions like heart disease, stroke and lung cancer, contributing to around 36,000 deaths annually.

A recent study by Kings College London looking at nine English cities demonstrated that on high pollution days there are 673 additional out-of-hospital cardiac arrests and hospital admissions for stroke and asthma, with spikes in ambulance 999 call outs.

Last month, a group of 175 doctors warned that air pollution is directly adding to current pressures in accident and emergency departments.

The changing climate is leading to more frequent heatwaves and extreme weather events such as flooding, including the potential spread of infectious diseases to the UK. Almost 900 people were killed by last summer’s heatwaves while nearly 18 million patients go to a GP practice in an area that exceeds the World Health Organisation’s air pollution limit.

Scientists believe perhaps a third of new asthma cases might be avoided by cutting emissions while Lyme Disease and encephalitis are among conditions expected to become more common as temperatures rise.

To help tackle air pollution, NHS England is establishing an expert panel which will look at changes the NHS can make in its own activities; in its supply chain; and through wider partnerships to enable it to get to ‘net zero’.

These include the Long Term Plan commitment to better use technology to make up to 30 million outpatient appointments redundant (it is estimated that 6.7 billion road miles each year are from patients and their visitors travelling to the NHS).

The Panel will submit an interim report to NHS England in the summer with the final report expected in the Autumn, ahead of the COP26 International Meeting in Glasgow.

NHS chief executive Sir Simon Stevens said: “With almost 700 people dying potentially avoidable deaths due to air pollution every week we are facing a 'health emergency' as well as a 'climate emergency'.

“Patients and the public rightly want the NHS to deliver for them today, and to help safeguard the future health of our children and grandchildren.

“While the NHS is already a world leader in sustainability, as the biggest employer in this country comprising nearly a tenth of the UK economy, we’re both part of the problem and part of the solution.

“Indeed if health services across the world were their own country, they’d be the fifth-largest emitter on the planet.

“That’s why we are mobilising our 1.3 million staff to take action for a greener NHS, and it’s why we’ll be working with the world’s leading experts to help set a practical, evidence-based and ambitious date for the NHS to reach net zero.”

In addition to the expert panel, the NHS will be taking immediate action in 2020, with a proposed new NHS Standard Contract calling on hospitals to reduce carbon from buildings and estates, whilst switching to less polluting anaesthetic gases, better asthma inhalers, and encouraging more active travel for staff.

The health service will also now launch its own grassroots campaign ‘For a Greener NHS’ to encourage staff and hospitals to cut their impact on people’s health and the environment.

The ‘For A Greener NHS’ campaign will be supported by the UK Health Alliance on Climate Change – which includes representative bodies covering over 650,000 NHS staff. The campaign will build on the work already underway to help trusts and staff to cut emissions, energy use and waste, including phasing out oil and coal boilers and increased use of LED lighting and electric vehicles.

Staff and local NHS organisations are being encouraged to feed in ideas to the Expert Panel, and evidence of steps they may have already taken within their own hospital. A new website https://www.england.nhs.uk/greenernhs/ will help local NHS bodies to share ideas and ramp up initiatives that are already working across the health service.

Jonathan Bray, director of the Urban Transport Group, said: “We welcome the launch of the ‘For a greener NHS’ campaign and its recognition of the key role the health sector needs to play in tackling the climate emergency.

“The health and social care sector is responsible for a significant proportion of traffic on our roads.

"We believe that there is much more that the NHS could do to reduce its carbon footprint on transport, from reform of non-emergency patient transport services to consulting more effectively on decisions on the location of healthcare facilities.

“Progress on these practical measures also needs to form part of a much better strategic dialogue between the NHS and transport authorities and we will shortly be writing to the chair of the NHS Net Zero Expert Panel and the director of the NHS Sustainable Development Unit with proposals on how we could take this forward together.

"Rapid decarbonisation is a complex challenge which will only be achieved by better working across sectors.

"We stand ready to work with the NHS to bring the health and transport sectors closer together in pursuit of this common goal.”