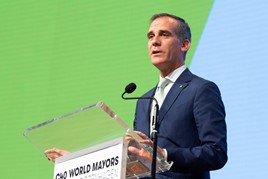 The Mayor of Los Angeles Eric Garcetti has become the new chair of C40 Cities Climate Leadership Group, taking over from the Mayor of Paris Anne Hidalgo.

Assuming his role, Garcetti declared the 2020s the ‘make-or-break decade’ for the climate crisis and committed to a Global Green New Deal - a series of essential steps to reduce temperatures, cut emissions, invest in clean energy, protect natural resources, and ensure a 'just' transition for workers impacted by rapid changes in the economy.

“When it comes to climate action, no one is doing more than cities, but nobody is doing enough — and the members of C40 know that local leaders have to step up to the plate to win this fight for our people’s prosperity and our planet’s future,” Garcetti said.

“The 2020s will be a make-or-break decade for the survival of our environment and the strength of our economy, and I have no doubt that C40 will stand front and centre in the battle to build a more sustainable, inclusive future for every worker and family in every community around the world.”

Hidalgo said that she was looking forward to working with Garcetti to deliver the Global Green New Deal.

"Now is the time to tackle the climate emergency and create the future we want, especially through a joint effort with young climate leaders as representatives of what, I trust, will be the Generation Green New Deal," she said.

Picture: Eric Garcetti at the C40 Mayors Summit in Copenhagen 2019