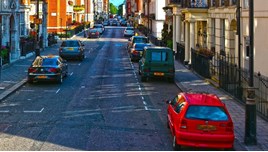 A new report by think tank Centre for London has called on London councils to increase charges for residential parking to help drive down car ownership in the city.

It said car owners are currently underpaying for their on-street residential parking space across London and calls on councils to act more strategically with parking controls, promote alternatives to car ownership and use, and reallocate parking space to other uses that Londoners prioritise such as cycleways, disabled bays and green space.

The report, Reclaim the kerb: The future of parking and kerbside management in London, found that the annual cost of operating residential parking spaces outstrips the price that drivers pay for residential permits.

The report said that on average it costs councils £336 to operate a parking space in inner London (compared to average resident permit costs across councils between £51-£230), and £295 in outer London (compared to average permit costs between £29-£154). Instead pay and display, and enforcement charges, subsidise lost revenue from resident permits.

Centre for London analysis of JustPark data found that spaces were being rented out at a yearly average of £2,740 in inner London, and £1,587 in outer London.

The report also found that boroughs’ reported parking expenditure does not reflect the full cost of parking provision.

Between 2014/15 and 2018/19, London boroughs collectively made an average annual parking surplus of £243 million, but when other costs required to operate Controlled Parking Zones such as road maintenance and back office staff are taken into account, this surplus diminishes significantly and even becomes a loss for four London boroughs.

Any surplus is ring fenced by the government for transport services, including road maintenance and provisions for disadvantaged groups.

The under-pricing of residential parking can also incentivise car ownership and use, when travelling on foot, by bike or public transport could be a viable alternative.

Just over half of Londoners (56% of households) own a car and this rate has fallen by only 4% in the last 10 years.

Meanwhile the proportion of trips made by public transport, walking or cycling in the city remained static over the last three years.

With more than half of London councils having declared a climate emergency and road transport  contributing over 20% of the city’s emissions, the report argues that the time has come to rethink parking policies and support the shift towards sustainable modes of transport.

It recommends that councils should set residential permit charges at a level that fully covers operating costs; review the coverage, size and operating hours of Controlled Parking Zones regularly and move towards an emission-based charging structure for resident permits, and escalate charges for additional vehicles.

“With a climate emergency on our hands, councils can play an important role in encouraging the shift from car use towards walking, cycling and public transport – and many are already doing good work here.

“There will continue to be a place for private cars in the short and medium term, but what we need now is action. The time is right to rethink the way councils approach parking and reclaim the kerb, accelerating London towards the greener, safer, healthier city that will benefit us all.”

He said: “Transport is the UK’s largest and growing source of planet heating emissions, with the largest proportion coming from private cars. That’s why Hackney Council is working to ensure that the future of our borough is built around the principles of fewer, cleaner, smaller, and slower motor vehicles on our roads.”